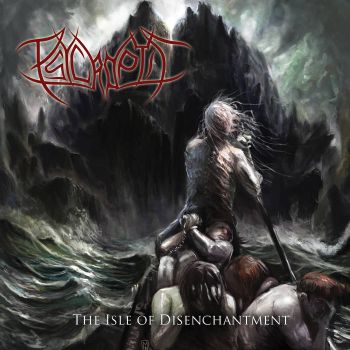 This cute little full-length generally gets overlooked in favor of the next album, which was unquestionably their breakout point. Being one of the first (if not the first, I did some digging but couldn't find another decidedly techy Aussie band that had a full-length out around this time) Aussies to the tech-death game is a worthy enough accomplishment, but it does seem strange that The Isle of Disenchantment receives very little attention, especially because it's the most similar album to Scepter of the Ancients in Psycroptic's discography. Not only is this the only other album with Matt Chalk, subsequent albums saw them continue down a much more melodic and wanky path that was starting to poke its tendrils in by Symbols of Failure.

I wish I had a "hot take" or a somewhat unique insight on this album, but I figure my feelings towards The Isle of Disenchantment are probably the same as everyone else's: it's competent, but ultimately an under-developed and unmemorable album in comparison to The Scepter of the Ancients. In hindsight, this really feels like a debut, professional and well-executed as it is. There's many ideas present that don't totally fit the "Psycroptic mold" that the band gives the spotlight to on this album, giving clear hints that they were still working out what fit and what didn't. The subtle grooving and clean singing in 'Psycroptipath' is the easiest example, but with more of a reliance on thick tremolo riffs and less on the extra flourishes throughout the album, there's a curious sonic similarity to early Quebecois melodeath (think Day Into Night era Quo Vadis) that doesn't take root in later albums. The songs are denser with ideas, but Psycroptic's haste to cram all the riffs they can into a song comes at the expense of memorability and dynamics. Many of the songs just hop from one section to the next after repeating it maybe 2-4 times and never returns to the song after that, creating this linear stream of riffs that are interesting and even have a nice little swing to them every now and then, but never full take root in your brain. I hear the main riff from 'Skin Coffin' playing in my head even if I haven't thought about the song in months. If such riffs do exist in this album, Psycroptic doesn't give them enough time to do their thing. None of the riffs are bad, I can listen to this all the way through and not feel disengaged, and I'm not compelled a strong desire to listen to something else...except for maybe The Scepter of the Ancients (and some choice cuts off Ob(servant)), but that being said, nothing on this sticks.

That may be partially due to the non-repeating song structures, but it also has to do with the generally embryonic nature of The Isle of Disenchantment. It's hard to structure songs around monster hooks if you haven't written hooks at that level yet. The Haley brothers have some of the best guitar-drummer chemistry out there and it generally results in some stupidly catchy songs, but The Isle of Disenchantment was the phase where they were still working it all out - the ebb and flow of both instruments has a narrower range of motion, and the drums sound like they have less...personality? On later albums, good or bad, I can hear a song and be able to tell it's a Psycroptic song in less than ten seconds, but Isle of Disenchantment is the only one I might be stumped by for at least a couple minutes. To put it one way, it's more conventional death metal, even though it's way less refined.

The Haley brothers aren't the only culprit, though. Matt Chalk isn't what he's been made out to be. Like everything else, the foundation is there, but it's lacking the extra special something that made Chalky magical. The Scepter of the Ancients features a top 10 all-time harsh vocal performance, and what vaults Chalk into that category is his versatility. He sounded like he had forty-seven different voices on Scepter, but on Isle he has three, maybe four, and mostly sticks to his low growl and high prickle-rasp. While still retaining a degree of distinctiveness, he doesn't have that touch of alien weirdness that quickly ensnares your ears. It's not bad, but it's not there yet. When he occasionally dips into some rapid-fire delivery, it whizzes past and feels more like a tertiary add-on. The biggest all-around hindrance of this album is that Psycroptic doesn't utilize their more technical abilities in a way that stands out, and I think that could be said for each musician. I guess that's the thing, though, they were young at this point and relatively early to the tech game. We have the benefit of time and know what they became at this point, so it's easy to handwave The Isle of Disenchantment aside, as it's the band's most ordinary death metal album. Bands will often get stuck trying to recreate the success and imitate the personality from their debut, but Psycroptic benefitted from refining and adding to their foundational sound, and as a result, every single Psycroptic album after this sounds a lot more like Psycroptic.