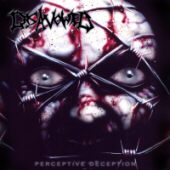 I never realized how much I fucking hated the vocals on this album but 'Rhizome' has been stuck in my head lately so I decided to give this album another listen after not having listened to Disavowed for a long time. I can say 'Rhizome' is definitely a great ass song, but the vocals just make it less good as it can be.....

Let me get this immediately clear and straight, the vocals on this album ARE ABSOLUTELY TERRIBLE AND SO FUCKING ANNOYING. Jesus, I can't even enjoy a damn song the way I want to because these vocals are constantly raping your ears, it never stops and it's extremely unpleasant. This actually made my head hurt, I pushed myself to listen to this entire album all the way through and when it ended I felt an immediate sense of relief. "Ah, no more pain and suffering. I can finally move on to another album now."...... That isn't good, lol. It really sucks that such a promising album is ruined by the overdone vocals. This next sentence may sound weird, but make sure you read it carefully, so you see what I mean. The vocal work isn't bad, he isn't a bad vocalist, it's just the fact that they sound exactly the same throughout the entire album. Every single song. Irritating. Ear-aching. Ugh. That's why I gave this album a -2.5, the vocals RUIN IT.

Aside from the only issue on the album, the music is actually very good. This is your average "halfway underground - halfway known" type of brutal death sound, similar to Pyaemia. The drums are easily the best aspect of the album. They have a good sound that's common in a lot of brutal death released in the 1995-2005 space, and he does a damn good job at playing too. His blasts are consistent, never fails to keep up with time and tempo, and fills in every empty gap he needs to. One of my favorite things about the drumming on this album is that (Mainly on 'Rhizome' I'm talking about), at the end of every measure of his blasting he continues to the next measure with a swift and sudden ride cymbal pause with two snare hits, and it's pretty damn satisfying. If you listened to this you'll know exactly what I'm talking about. He does this pretty much on every song throughout the album and it's a great way to continue on to a next measure. The drum work is no doubt the best aspect of this album for sure; it has consistency, flow, and a solid sound.

The guitars are alright, nothing amazing at all in my opinion but it's definitely enjoyable and it'll for sure get you moving. It's hyper and filled with energy like any other brutal death band. Decent guitars but they're missing something - it's not as solid as I'd like it to be, kind of a loose and leafy type sounding guitar if that makes any sense. But overall the guitars are good, the songwriting makes up for the guitars not sounding as good as they could be though.

The issue that this album has is that it has cool and catchy songs, but they're ruined by the vocals. Big time.

It's weird how I like Disgorge's "Parallels of Infinite Torture" but I don't really like Perceptive Deception even though they have similar vocals. I don’t know, "Parallels..." just does it right, it fits on that album unlike this one where it doesn't.

This is pretty much just a decent album. This would be more than decent if it weren't for the excruciatingly repetitive vocal work. It's pretty sad that such a promising album is completely ruined by crappy ear-raping vocals. Disavowed is very cool, but this album is nowhere near a favorite of mine at all. Although I do very much enjoy 'Rhizome', that's for sure one of my favorite brutal death metal songs (and same goes for others too) for obvious reasons. But this album as a whole doesn't do it for me. Last time I listened to this album was during July 2019, you'll never see me listening to this on the average at all. The band's second album Stagnated Existence is way better, WAY better. Go listen to that album instead, it's good in all aspects and the vocals are 10× better than they are on here.