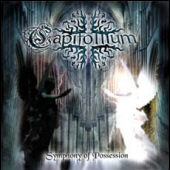 Type: Full-Length
Release Date: 2004
Label: Oupiric Productions
Genre: Black, Symphonic
1 Inverted Chant
2 Fire In His Hands
3 The Will And The Order
4 Aurora In The Nightsky
5 Oblivion Of Thy
6 Rebirth Beneath The Stone
7 Holyness Of The…
8 Waiting Until the Sundeath
9 Fugue In The Myst
10 Unleashed Sorrow
11 The Mercy Of Christ
12 Ave Maria
13 Almost Perverted
MetalBite on YouTube

Capitollium was an arcane formation from the Ukraine. The band does not exist anymore and based on the assumption that their later works are as terrible as the here presented debut, it was a good decision to call it a day. Despite the fact that Symphony of Possession houses some relatively tolerable lines every now and then, for example at the end of "The Will and the Order" or the opening of "Fugue in the Mist", the album sucks.

It seems as if the guys wanted to create an album that runs in the vein of Cradle of Filth, Hekate Enthroned and similar bands with an affinity for opulent structures and bombastic keyboards, but their symphonic approach is doomed to failure right from the beginning. This style needs a voluminous sound, but the here recorded material has been punished by a thin, powerless and non-heavy production. Amateurish is the word that I actually want to use for this sound (and for the song titles: "Holyness (!) of the..."). Just listen to the hollow snare. And where are the guitars? Buried by the keyboards which appear as the soundtrack of a Catholic mass. No doubt, Capitollium deliver, to quote their last song title, an "Almost Perverted" form of black metal.

As a general rule, the songs do not only lack intensity. They also do not even try to achieve a harsh appearance. Bubblegum keyboards accompany the ridiculously monotonous voice. Okay, the lead vocalist contributes the only element that adds a slight black metal touch. Due to the absence of fast or strictly hammering sections, the tedious work appears as a (dark) pop record. Only a ceremonious atmosphere, propped up by almost sacral lines, does not automatically lead to black metal vibes. The overload of cheap effects, for example the integration of (synthetic) bells or the massive reverb on the vocals, is not helpful as well. Yes, I have mentioned the British formations at the beginning of the second paragraph, but in terms of quality, Capitollium are light years away from the stuff of these bands. The Ukrainians want to sound like the role models, but they only come up with a light version of the original sound. The longer the album lasts, the more it sounds like the efforts of pretty meaningless bands such as Morgart from Switzerland. Fairly acceptable tunes like the eighth track remain an exception (and would be the downer on each and every album of Cradle or Hekate).

Long story short, nobody has ever asked for an album with computerized, soulless melodies that seem to originate from the birthday party of a five-year-old robot. "The Mercy of Christ" holds some blast beats and a fairly medieval atmosphere, but too little, too late. Both Capitollium's existence and end remained unnoticed and everyone who mourns about this fact should listen to Symphony of Possession in order to understand this general indifference.