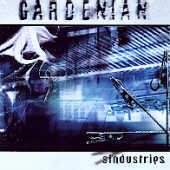 Sindustries is the album that introduced me to Gardenian. I have to say that is a rare moment that I hear a band for the first time and the first 20 seconds has me bouncing my head to the beat; Gardenian managed to achieve exactly that. In fact, I had to listen to the album about 5 times in two days before writing the review because I think the music is that damn good!

Some might compare these guys to Fear Factory (without all the techno remix stuff), but I’d say these guys are a good head and shoulders above Fear Factory. Gardenian, formed by ex-In Flames guitarist Niclas Engelin, has all the inclinations of a masterpiece metalwork wrought by experience and well-honed talent.

Jim Kjell’s roar is fantastically ballsy, shoving a monster-wall of testosterone in your face. The adversely clean vocals take an amazing powerhouse anthem-like tone, especially on tracks like Heartless (that one’s a jean creamer!).

One of my fav’s on the album is Sonic Death Monkey. Granted, I’m biased toward anything that has the word “monkey” in the title, but this is just a bad-ass teeth gnashing war-horse, reminiscent of Killing Joke’s sci-fi muscle sound.

Bottom Line: Gardenian has sharpened a new edge on the blade of melodic death metal and it is freakin’ kung-fu! C’mon, be MANLY and buy this album!

Rating: 8.5 of 10 (I almost put my head through a wall not giving this a 9, but I reserve those for Pure-Genious-Works like Vulgar Display of Power, and I think Gardenian has one of those coming up next)