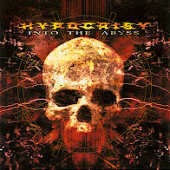 Does anyone here remember Skinny Puppy? Have you seen the Evil Dead series? That’s what Into the Abyss reminds me of; Ogre of Skinny Puppy possessed by The Evil Dead accompanied by a band of wraiths. You say, “Hey, Atomic, is that good or bad?” Personally, I think that’s a GREAT thing; I love creepy stuff!

Peter Tag-I-need-to-change-my-surname, is really plotting the course for an orchestra of horror with this album. I think the best stuff on this album comes when Hypocrisy drops their up-tempo in favor of wrapping listeners in an unsettling, seething atmosphere that seems to be summoning an evil force that has laid dormant in the pits of their stomachs. With this in mind, picking out tracks like Resurrected and Death Row (No Regrets) as my favorites of the disc came with ease.

I enjoy the speedier tempos as well, but I don’t think that they can really hold a candle to the creepiness of the slower tracks. The faster songs such as Legions Descend have a subtle ferociousness, like an animal slightly barring it’s teeth, with enough potency to satiate most metalhead audio metabolisms. But for those of you who know the industrial music scene, it’s obvious that Peter Tagtgren is working furiously to become the Al Jorgensen of death metal.

Bottom Line: Hypocrisy is on track to make its listeners teeth bleed a gaseous evil. This album is wicked… not the 18 yr.-old suburban-white-male-drinking-Budweiser “ya dude, wicked!”, but the real deal.