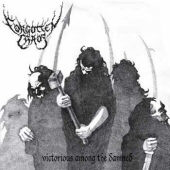 Victorious Among the Damned? Well, maybe it's true that Forgotten Chaos belonged to the damned, but unfortunately, they were not victorious. A short existence ended by suicide and to be honest, this was no big loss for the scene. Forgotten Chaos were, sorry for that, quickly forgotten.

It might be that the musicians did not lack technical skills, authenticity or enthusiasm. But regardless of their ambitions, they were definitely not able to write good songs. It is no exaggeration to say that each and every track remains faceless. I don't want to be cynical, but I am almost surprised that one can write 13 tracks without any flash of inspiration. The music leaves absolutely no impact. A rumbling, mid-paced mishmash with monotonous vocals is all I hear. Many instrumental parts come and go without presenting atmosphere, intensity or dynamic. The rare melodies sound extremely boring. "Psykeltic Sacrifice" tries to score with a Celtic Frost-inspired riffing at the beginning, but it mutates quickly to a blurred disaster. I really don't know what went wrong during the record session, but all these results show blatantly that Forgotten Chaos were badly advised to publish this material. Almost needless to say that they also have a suicidal tendency and therefore they destroy the pretty acceptable beginning of "Forgotten Chaos" in a matter of seconds.

Aggravating this situation, the production must be considered as a total flop. The "vokillz" are somewhere in the background, the guitar sound is horrific. Not to mention the six strings. Is this the young Quorthon (R.I.P.) on dope? The guitars sound ill-defined, imprecise and synthetic, far away from the icy guitar sounds that once came from Norway into our comfortably tempered living rooms. From this follows that any form of black metal mood is totally missing. It's just a permanent noise and I really wonder that nobody forced the studio team to record the songs again. But maybe a clever guy realized that these tracks will never hit the mark, regardless of the exact mix. However, it hurts to listen to this output, because the band's idealism was not crowned with success. Only the artwork has a certain charm.

Bands like Forgotten Chaos made their contribution to the black metal overkill. I am sure they had good intentions, but this alone is not enough. Don't record an album as long as you are not able to write at least one impressive chorus. Or a catchy riff. Or atmospheric sequences that can fire the listener's imagination. Or thrilling breaks. Or... I don't know. Just accept the fact that you belong to the damned who do not have the skills to forge a good full-length. By the way, I share this fate.