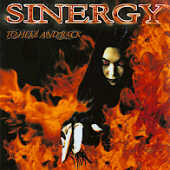 Type: Full-Length
Release Date: 2000
Label: Nuclear Blast
Genre: Power
1 The Bitch Is Back
2 Midnight Madness
3 Lead Us To War
4 Laid To Rest
5 Gallowmere
6 Return To The Fourth World
7 Last Escape
8 Wake Up In Hell
9 Hanging On The Telephone

Look people, I tried, REALLY!!! I did! I tried to listen to the whole album straight through and I couldn't. This is like trying to take the 60's Batman TV show seriously.

While Laiho's guitars can be impressive, the music just doesn't have the creativity and potency needed to make a successful power metal album.

When I first heard about this band, I was really hoping to like it. However, one of the things I was most interested in, Kimberly's vocal effort, was one of the bigger dissapointments. While listening to the first track, The Bitch is Back, I could've swore that Savatage had pulled one of the biggest musical pranks in history by hiring Stacy Q or Cyndi Lauper as their new lead vocalist.

Ok, I have to stop here because I wanted to like this album and now I'm feeling guilty about stomping a mudhole in its ass.

Bottom Line: Some serious cheeseball monkey rompin' going on here. If you're not afraid to tell your friends that you like Stryper, go ahead and buy this... or wait for an equally gay friend to give it to you.