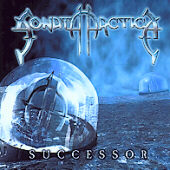 Let’s start by saying that I’m not a big fan of the power metal, but… I think that is about to change. I just picked the new MCD from Sonata Arctica called "Successor" and… I’m shocked. This music comes from guys with 20 years of age on average?

If you want me to describe their style than imagine taking the best parts from Stratovarius, Helloween, Rhapsody and Hammerfall and then make it even more melodic and more polished.

This MCD includes three old songs from their debut album "Ecliptica" ("FullMoon", "Replica" and "My Land"). The last two are live and were recorded during last summer’s Provinssi Rock event. Even though they sound really good, I don’t understand a band with one release already recording live tracks. Since I didn’t hear their debut album (that is going to change in a hurry!!!) I can’t say much about the changes on those three tracks.

Two covers "Still Loving You" (originally by the Scorpions) and "I Want Out" (by Helloween) are the two diamonds on this CD which I have to admit are much better than the originals. Neither of them are exact copies but rather much faster, heavier and with great guitar solos.

"San Sebastian" and "Shy" are two new songs, which prove the music skills of these young people. From a fast, melodic "San Sebastian" to a dreamy-romantic ballad "Shy", Sonata Arctica show us the wide range of their abilities and endless musical talent.

Bottom Line: A must have for any power metal fan, for everyone else, this is a perfect way to start being one.