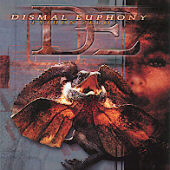 Let me get something out of the way here, can all you up and coming musicians do me a favor and stop giving your bands names that are the metal equivalent of after-school specials? If I keep hearing names like Dead Silent Slumber or Eternal Tears of Sorrow… or Dismal Euphony (heretofore known as DE)… I swear people, I’m going to raise a giant army of monkeys and I will hunt your ass down and you will be butt-romp-(Godly Editor’s Voice to Atomic: Shut theeee hell up!)
Fine then. I liked when they were called The Headless Children (THC) much better. What the hell happened to that? What, too many W.A.S.P. similarities?

Let me tell you that I listened to this thrice before reviewing it. The first time I didn’t think much of it. Then I went to a party and returned to listen to it twice more. I’m still not sure if this band is meant to be taken seriously. Again, like W.A.S.P. , particularly the album The Headless Children (when they dropped the super gore fiesta showmanship), you’re not quite sure if the musicians are taking themselves seriously. In fact, I can sum this up in one sentence: Imagine what Green Jelly would be like if they took themselves seriously.

I know that’s a fairly apathetic statement, so let me get to the highs and lows of this album.

The Highs: I think Magma is by far, the most successful song on the album. Though it’s one of the slower tempo songs, I think it really gives the listener a pretty good idea of what DE is about. There are times during this album that this band is so dead on that the proverbial “grandma’s cooking” couldn’t hold a candle to their musicianship.
(Godly Editor’s Voice to The Reader: Don’t worry, I’m not sure he knows what he’s talking about either.)
My personal favorite of the album is Fly In Eye. An unusual and twangy tune, with an enormous flavor for a surreal and upbeat old west with chorusing female vocals that sound like a drugged out hybrid of Missing Persons and Fleetwood Mac.

Another track worth mentioning is the well crafted and unusually well executed (for this album), Needles. While this track seems to be one of the more serious tracks on the album, some of the lyrical content on the rest of the album is very amusing in a campy way (hopefully intentionally). I also want to give a REALLY BIG “Hell Yeah!” for the inventiveness shown on this album.

The Lows: There are some concepts and some composing here that are just plain rough around the edges. Though lyrically entertaining, Plasma Pool seemed very sloppy. On that same card are the tracks Birth In Reverse and Python Zero. The energy is there, the desire is there… but it just doesn’t feel like the conviction or perhaps the required time was there.

I think the piece that really struck me as lame was the last 45 seconds of track numero uno, Critical Mass. What started out as one of the mid-to-lower points in DE’s song composition, quickly turned into a speed power-chord jam of little talent that reminded me of my 13 yr. old garage days.

The In-Betweens: The in-betweens are all over the place, like a suburban field of Chicago littered with goose shit in the spring. You’re not quite sure to make of where the band wants to go and what they’re really doing.

The Bottom Line: One word – GreenJellyTakingThemselvesSeriously! … and some really clever and evil monkeys that ar- (Godly Editor’s Voice to Atomic: Quiet, you!)

Rating: 6 of 10. Despite the sore spots, the ingenuity shown is pretty fabulous. I would love to see these guys grow, and I’d like to see a live show.