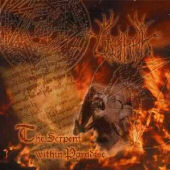 One of the countless mysteries in metal is that nobody likes to write a review for Grabak. Don't know why, their works are absolutely worth listening to. The Serpent Within Paradise can be understood as a typical work of the Germans. Admittedly, the mix sounds marginally sterile, especially the drums appear lifeless from time to time. However, neither the nagging of the lead vocalist nor the guitars give arguments to hate the album. By contrast, the strange collage of the artwork remains dubious. Does it have a message or not? Guess this is another mystery in metal.

The compositions form a pretty monolithic unit. Grabak stay loyal to their sound and this means that high-speed drums accompany clanking guitar lines. Sometimes the vocals have an involuntarily comical touch, because every now and then they rather sound quirky than evil. However, Grabak followers - does this species exist or am I the only one who listens to their albums - are used to this singing style. The aforementioned guitar lines are of higher relevance. "Der Antichrist", for example, holds some fantastic parts which are driven forward by the merciless guitars. They combine sharpness with brutality and create a mean clump of hatred. Yet it is not easy to pick out single songs, because they do not differ from each other significantly. This is not to say that the protagonists play one and the same song ten times until they have reached the 45 minutes mark. Either way, their frame does not leave much wiggle-room for experiments. Given this situation, it is nearly a mystery - once again a mystery - how they manage to integrate an almost catchy chorus into this inferno, but this is exactly what they are doing in "Bloodspawn".

Minor flaws are present as well. The over-use of the double bass leads to an almost robotic sound and the number of immediately killing sequences is relatively low. However, the album grows. At first glance, the listener seems to be lost in the thicket of black emotions. But with every new round, she or he gets more access to the songs and so it feels good to come back to The Serpent Within Paradise from time to time. It's an intensive work and it needs the full attention, but who wants to consume easy-listening black metal? I do not have this intention and so I enjoy the here presented work, albeit it does not have the theatrical or dramatic touch that the real classics of the genre have, first and foremost "De Mysteriis Dom Sathanas" (mysteries, everywhere mysteries). Indeed, the album can become slightly strenuous due to a small portion of black metal run-of-the-mill sections.

All in all and as already mentioned at the beginning, this album is recommendable without fuss or quibble. Even the thunderous, mid-paced outro adds value to it and the intelligently designed lyrics make the circle complete. Grabak have forged anything else but an ill-conceived work. Maniacs who enjoy Aeba, Enthroned or Setherial can't fail when checking this album. But if they do, it would be the next mystery to me.