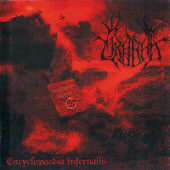 Black metal from a German band with German lyrics - this is not wholly exceptional, but I like it. Not solely because I understand easily the lyrics but also because black metal has to convey an original and natural aura. And I really do not know what could be more natural than singing in one´s mother tounge. In the case of Grabak, I can luckily state that the extraordinary lyrics fit perfectly to the music. They describe the journey of a wandering prophet who has to face unprecedented torments before he finally falls under the spell of a diabolic God. The extremely nagging vocals of Jan K., who sounds like also being permanently tortured, match perfectly to the lyrical concept. This also applies to the rare narrative moments which are embedded in the nine songs.

Let me now come to the music. Although the opener starts slowly after the intro, Grabak are in their element when delivering sheer frenzy. Insofar it is not astonishing that the group prefers high speed parts. But they do it in a clever way without neglecting slower sequences which often follow a hymnal approach. The jagged riffs and the powerful and precise drums are the stimulating forces that do not permit the wandering creature to pause for breath while its body and soul get injured. Even if Grabak are reaching top speed, the album offers a dark and menacing atmosphere which is not interrupted by narcissistic solo excursions. The band focuses instead on the intense songs themselves while having a fine instinct for the necessary number of creepy melodies. Each and every track is intelligently constructed but nevertheless retraceable at any time. Of course, one realizes some Norwegian influences, but they are never intrusive and Grabak concentrates on their own creativity. Regardless of that, at this time more or less all black metal musicians all over the world were inspired by the Norwegian pioneers.

All songs contribute to the success of the album which is characterized by its perfect flow. Despite the admirably succeeded compositions and the continuously high quality of the music, there are some songs that stand out. In accordance with its lyrics that describe the downfall of the prophet´s surrounding, the neck breaking 'Bluttaufe' drags you into the abyss and the longer the story lasts the more you will probably identify yourself with the prophet. 'Erfüllte Prophezeiungen' and 'Grand Grimoire' intensify the feeling of being exposed to superior forces due to the more and more insane sounding vocals. Grabak deliver the most intensive songs in the second half of the full-length so that you will increasingly dive deeper into the music and the story line. The atmospheric outro closes the circle by repeating the intro. Even during this last piece that offers a brief dialogue between the prophet and his authoritative new God, the band knows how to keep the tension. The guys hereby benefit from the appropriate and contemporary production that puts all instruments in the right light. All the musical and sound engineering conditions are therefore met in a very convincing manner. Moreover, the harsh production does not copy the works of the Scandinavian black metal role models in the early nineties.

Admittedly, Grabak did not reach that excellent level of intensity and brilliance ever again, although they never released a bad or even just mediocre album so far. The perfect balance of high velocity and black charisma remained unbeatable as well as the wealth of outstanding riffs and the fascinating melody lines were not reproducible. I am sorry, but I am unable to identify leastwise a tiny mistake on Encyclopedia Infernalis. Therefore, I have no choice to give another percentage than mentioned below.