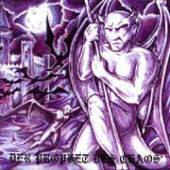 Germany was once the center of the bulwark of the European thrash metal legions that fought against the superiority of the thrashing hordes from the United States, but it failed to initiate the second wave of black metal. Nevertheless, it did not take long until some musical arsonists from Germany joined the ranks of the Norwegian (Scandinavian) pioneers. Grabak's first work saw the light of day in 1999 and therefore one cannot say that they belonged to the early birds. Yet I don't care, because their debut sounds authentic and time has told that their hearts were (and are) imbued with blackness. The dudes do not lack integrity or persistence and therefore a new album (Bloodline Divine) is targeted for November 2017. But we turn back to Der Prophet des Chaos.

It's a concept album whose story has been continued on the immaculate Encyclopaedia Infernalis. This album marked a quantum leap, because the debut is not bad, but its songs also do not spread the vibes of classics. The keyboards gelatinize some sections of the songs, memorable parts do not occur in abundance and the production does not surpass an acceptable level, because it suffers from a lack of transparency and penetrating power, at least to some degree. Yet the main problem of the album is the concept itself, because the chaos prophet hurts the flow of the full-length in a significant manner. All pieces with an odd number are no songs. Only the prophet is speaking. Aggravating the situation, he has a ridiculously deep voice. Instead of sounding frightening, it seems as if a jester has recorded his boring narrations in slow motion. Hey prophet, shut up! Anyway, Der Prophet des Chaos still has its moments.

The pretty complex compositions reveal some furious parts and a good riff appears from time to time, for example at the beginning of "Falls and Right". The musicians also prove their talent to integrate atmospheric breaks. Some of them tear the flow of the harsh parts abruptly, but the overall picture shows a solid result. It is just a pity that the songs do not offer a catchy line every now and then. Tracks like the mostly vehement "Night of the New Emperor" prepare the ground for the perfect Encyclopaedia Infernalis in view of their high-speed inferno, but this does not mean that they keep sticking in the ear. Okay, Grabak shatter the silence uncompromisingly and they try to create some keyboard lines that intend to make us think of some works of Dimmu Borgir or Emperor. No doubt, the guys do not offer sloppily created songs and the constantly jarring voice indicates the passion of the lead vocalist. I admit that the final touch is missing, but debutants have the right to leave room for improvement. Keeping this in mind, Der Prophet des Chaos marked a good entry for the German gang.