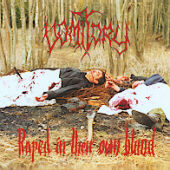 Lo and behold, Vomitory are back in business again in order to celebrate their 30th birthday. Many live dates have already been confirmed for 2019, a new album is still uncertain, but, as a German proverb says: "Die Hoffnung stirbt zuletzt" (hope is the last to day). However, even if the band decides to add no further album to its voluminous catalogue, death metal freaks, vandals and all kinds of aggressors have the possibility to go wild to the old works of the Swedes. Raped in Their Own Blood, the debut, has only one major flaw. The artwork sucks. But in terms of the main content, the music, the band shows its muscles. The experience of the band's first seven years from 1989 to 1996 shines through the individual tracks. There are absolutely no immature sequences, the album is basically on a par with the later works and everything is death metal as f**k: the sound of the guitars, the barking voice, the general brutality.

Moreover, the ten songs don't suffer from incoherent patterns. The listener does not get lost in a continuum of noise, there is always a certain structure that guides him or her through the wasteland of terror. The main riff of "Inferno", to mention but one example, serves as point of orientation, because it adds a very dynamic touch to the song. It is exactly this type of riff that saves death metal formations from monotony. The limited genre needs such a feature to avoid boredom and the debutants are aware of this challenge (and, better still, they are able to manage it). They also do not shy away from a few catchy elements. The chorus of the title track keeps sticking in the mind in a matter of seconds. Finally, Vomitory vary the pace more or less successfully. The average velocity is not too high and so they also create some nearly melancholic sections. Bolt Thrower hail from the distance every now and then, but they are no obvious influence.

From the air raid sirens which introduce the songs until the last chord, Vomitory do not show a sign of weakness. Highlights such as the title track embody exactly the kind of violence death metal is known for, while "Dark Grey Epoch" offers, among other things, lines that almost remind me of Candlemass. But the doom-compatible sections remain exceptional on an album that does not head for new shores. The brutal production as well as the music focus on purity and therefore any alien elements do not show up. The magnificently titled (joke, joke!) Raped in Their Own Blood is exactly what it wants to be: a clear statement, a representative record of the genre for an explicitly defined target group, even though the closer reveals a certain, black painted Celtic Frost inspiration. So, love it or hate it, but don't fear you will be left in uncertainty. And now I wait for a new album of the dudes. I am curious to see what will happen in 2019, not only in relation to Swedish death metal returnees.