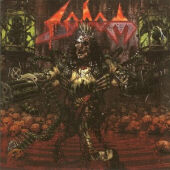 Type: Full-Length
Release Date: April 21st, 2006
Label: SPV Records
Genre: Speed, Thrash
1 Blood On Your Lips
2 Wanted Dead
3 Buried In The Justice Ground
4 City Of God
5 Bibles And Guns
6 Axis Of Evil
7 Lords Of Depravity
8 No Captures
9 Lay Down The Law
10 Nothing To Regret
11 The Enemy Inside
MetalBite on YouTube

Self-titled albums are mostly the first output of a new formation or they indicate a change in style. Just think of “Bathory” or “Metal Church”, “Metallica” or “The Tankard”. Sodom, the eleventh full-length, is definitely no debut and it also does not really bring a remarkable degree of new elements to the music of Angelripper’s triumvirate. It’s just weaker than its predecessors and, bad omen, it suffers from an opener without clear direction. Its chorus is okay, everything else is going nowhere. This was a bad surprise, especially in view of the fact that the Sodomaniacs had to wait five years for the material.

Due to the massive, almost noisy mix, Sodom shows a very heavy side of the trio, but parts of it neglect high velocity. The angels ripping boss and his henchmen try to score with a basic brutality and indeed, this concept works from time to time. Nevertheless, usually there is a beast inside Sodom and whenever it has the chance to break out of its cage, the band’s music reaches its pinnacle. But the here reviewed work mainly shows a sometimes solid, sometimes rather tiring kind of controlled violence which tells the aggressive animal to stay inside the cage. This is regrettable and I am missing the beast even in songs like 'City of God'. It starts bumpily, but it scores with fantastic solos and leads of Bernemann after the second chorus, a great musical understanding is linked with pure heaviness – anyway, the bestial side of Sodom does not shimmer through. More or less the same can be said about 'No Captures'.

However, tunes like 'Buried in the Justice Ground' make clear that even a nearly breezy approach can create a very proper degree of density. Its cruel chorus (hear Angelripper screaming “Burrrriiiieeed”) has unexpected earworm qualities. Yet all these positive details cannot hide that the hit rate is, on the basis of an internal comparison, rather low. Even a total neckbreaker ('Wanted Dead') does not have the thrilling effect of former bullets. The somehow adult sound excludes the likeable side of Sodom, this eternally juvenile, somewhat chaotic, heavy-handed yet fascinating facet of the formation. Songs like 'Axis of Evil' have substance and they are thoroughly designed, but their sparks do not become a withering flame. If the truth be told, 'Axis of Evil' and two or three further songs simply lack fury and the average quality of the riffs cannot make up for this.

The album has grown on me during the last year. Especially 'Bibles and Guns', more or less useless at first glance, just needed some spins to impress with its raw, catchy and intensive chorus. I admit my first disappointment was not justified. Nevertheless, a couple of songs do not give me much even though Angelripper pukes his guts out in pieces like 'Lords of Depravity' (a song that passes by without any attention-demanding detail). I also miss the twinkle of an eye that songs like 'Gisela' or 'Wachturm' had. Tom and his comrades play the tough guys and that’s okay, but not overly exciting and slightly one-dimensional. Aggravating the situation, the boys run out of ideas during the last tracks. Sodom is no flop, but also not the statement it was meant to be. I admit that I always have great expectations when it comes to a new album of this legendary group and maybe my review is too negative in objective terms. Nevertheless, after the outstanding triple from ’Til Death… to M-16 I did not believe to be confronted with a work I had to get used to; and perhaps this process is not yet completed.