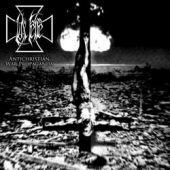 True Scandinavian darkness. From Portugal. I hope the irony isn't lost on these guys. All joking aside, I have to admit that this is a pretty entertaining album by a band that I don't hear too often about for some reason or another.

From just looking at the cover of the CD you can already make a good guess of what to expect and yes indeed, you can place this lot in between the other usual suspects: Marduk, Setherial, Unlord, Dark Funeral, you know the drill. It's an avalanche of blast beats, screamed vocals and tremolo picked riffing that goes for a 1000 miles per hour for a big part of this album, without anything like keyboards or female vocals. The similarities between the bands I mentioned above and Lux Ferre are abundant with the distinction being that the latter's songs are a tad less memorable. It's not all high velocity all the time though. From the middle of the album on the band loosens the accelerator more often. Take a track like 'Achtung! (The Devil's Garden)'. Here they slow proceedings down with the band letting some sparse melodies shine through the music, and this to good effect. They know how to keep it all varied without sacrificing their bite. It keeps the monotony out the door and makes for some moments of breathing space amidst the ongoing sonic onslaught. On album closer 'Brotherhood of the Goat' the band channel their inner Bathory and I've got to say they do it well. The production of the album is great, it's clear and aggressive and you're able to make out the different instruments. Maybe the drums could have been more up front in the mix but that isn't such a big deal in the overall picture. This is a good, aggressive and varied black metal release well worth its weight.

If your blood boils for fast 90's style black metal like Tsjuder, early Enthroned, Sammath and those mentioned above, snap this up. It's far from being the most original, but I'd take this above any of the arty-farty bullshit that's being churned out in certain parts of black metal today.