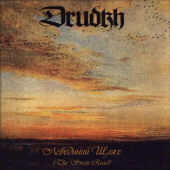 Drudkh’s discography is impressive in terms of quantity. Eleven full-lengths and a lot of miscellaneous stuff speak volumes. Moreover, there can be no doubt that they have released some good albums, but The Swan Road is not among these works. Despite the atmospheric and stylish artwork of the Season of Mist edition, the album exactly lacks atmosphere. The first regular track 'Eternal Sun' shows this painfully. Its fast parts seem out of place, the slower sections lead us to suspect that they could have done a much better opener and the fade-out at the end appears as the final proof of creative underperformance. And indeed, there are no melodies that draw me into the song. The real classics of Drudkh give me the feeling to be in their epicenter, in the eye of the storm. But on The Swan Road, there is always a significant distance between the songs and me. I am consuming the material without becoming a part of it.

One reason for this is surely the material itself. The compositions fail to present outstanding melody lines or hypnotizing harmonies. The more or less medieval 'Glare of 1768' illustrates the dilemma. This is no bad track and its melody cannot be blamed for a lack of substance. Yet it remains fairly expressionless and it needs nearly five minutes until I feel attracted by the song – and this period is definitely too long for a piece with a playtime of less than six minutes, if I am not mistaken. By the way, the production also does not convince. The album suffers from a lack of transparency and definition. Furthermore, its thin sound is not able to put the guitars into the focus. Their insufficient force cannot be ignored. Aggravating this situation, they sound really terrible during the mellow moments of 'The Price of Freedom', another track that passes by without explaining the listener why she or he should take the album into her or his heart.

Drudkh’s best tracks have repetitive song patterns and given this fact, it would be unfair to banish this album for its equally repetitive structure. But it needs high quality riffs or melodies to avoid boredom when it comes to this kind of song material and especially the guitar work on The Swan Road is far away from brilliance. The guitars exist, that’s true, but they do not take the lead and also fail to bring out the main points. Their mediocrity breaks the album’s neck, because it does not trigger emotions and – once again – it fails to create atmosphere. Of course, atmosphere is not the only criteria in black metal, but without this feature it is really hard to pen a strong genre work. Fortunately, Drudkh have too much talent to release a true stink bomb, but The Swan Road can be ignored – and, warning, its folkloric closer must be ignored! This track truly sucks.