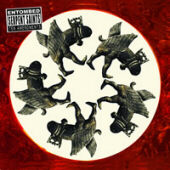 I normally hate the term ‘Legend’ because there are so many artists out there that never had deserved to be even closely called that, but yet many are handed the term like a lollipop after a doctor’s visit. It is a term that is way overused, and hardly ever coined correctly, but every once in a while, you'll find that band or person that truly has earned the right to be called that and then some.

Entombed is a band that has been written up hundreds of times since they appeared on the metallic horizon. Truly they have revealed themselves to be one of the best Death Metal bands ever. "Serpent Saints" is just another huge notch in the Entombed gunbelt, and proves that this band is as good as they are fucking heavy.

From the atmospheric rising of the title track to the brutal assaulting Punk-effused Death Metal of 'When In Sodom', the band continues to show you why they are one of the best bands ever to grace this little planet. Using the term ‘Legends’ is exactly the word that properly describes these amazing band. No other band (except for perhaps Carcass and the Death Metal icons
Death) could reach this pinnacle of sheer death domination.

Watch and learn all of you bands out there, these are your teachers. Entombed can show you the way on how to make metal right. Problem is, they might kill you if you try too hard. When you're this damned good as this band certainly is, it is hard to try and grab the brass ring. You might end up losing a limb.