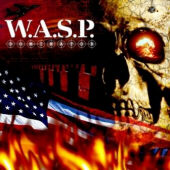 "Mercy" is the name of the first track, but Blackie Lawless knows no mercy. Welcome to Dominator, another album by the one-man-show called W.A.S.P. Yes, the master of his own circus made a few experiments during his career, but here it becomes again quite obvious that this man is caught in his own song patterns. "Mercy" is a good song, no doubt about it. A casual yet effective riff creates a slightly dark atmosphere and it goes without saying that the song boasts with an extremely good flow. Not to mention the strong vocals which are always able to make the difference. However, don't think that there is any new element, any unexpected detail or something like that. Lawless does what he almost always did, no more, no less, and he does it in a good way. Take it or leave it, but don't come to the conclusion that he is challenging himself in any way. The dude rocks within the frontiers of his own comfort zone. However, I tend to take it due to the catchy chorus and the coherent overall picture.

Good news, the opener is not the only strong metal rocker on this album. "The Burning Man" or "Teacher" go in the same direction and in particular "Heaven's Blessed" sounds the alarm. W.A.S.P. prove evidence that they can break out of quite commercial frames and deliver songs with a spiny appearance. Too bad that Lawless sees no sense in making an album with this kind of songs exclusively. His semi-ballads like "Take Me Up" give the listener a more than sufficient portion of schmaltz. I freely admit that the song is not really despicable in terms of melody and atmosphere, they walk on trodden paths and integrate as many stereotypes as possible. As mentioned before, I like the voice of Blackie L., but sometimes his whining and lamenting lacks authenticity. I don't think that millionaires should sing about their broken heart or something like that. Come on, dudes, it's easy to cry as long as you are rich. Nevertheless, Lawless cannot be blamed for delivering shitty numbers here, even though it remains a mystery to me why he offers a reprise instead of another new song - and by the way, why is "Heaven's Hung in Black" introduced by the melody of "When Johnny Is Coming Home Again"?

Every now and then, a faceless number has conquered a place on Dominator. The second piece is a high-speed number, not in objective terms but compared with the catalogue of the group. Unfortunately, the one-tone-riff fails to push "Long, Long Way to Go" on a high level. Once again, I am not speaking about a throwaway track, but it seems to be written in a loveless manner. The closer, a wannabe-good-times rocker, also does not give me much. On the other hand, the production scores with density, evenness and maturity. And what about Lawless himself? His portion of music is predictable, but predictably solid or even good - and his mentality is reflected by these lines in the booklet: "I love my country, but I'm scared to death of its government. Nothing I have ever written is truer." I am confused, because I could not express it better myself, although I live in another country than Lawless. Maybe this situation was the real reason why he wrote a song called "Mercy". He and me, we have one thing in common: we dominate nothing.