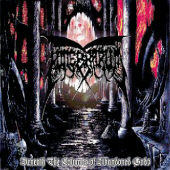 Whenever discussing the modern rotten sounding death metal bands you'll find merch for on a website like Dark Descent's distro store or Extremely Rotten Productions, the idea that seems to be tossed around the most is that it's a "revival" of old school death metal bands. Thing is though, that's not really very accurate. What exactly are these bands reviving? A lot of the influences on this style are like lesser known gems from Scandinavia - Wombbath, Abhorrence, Crematory, Funebre, plus a couple of US bands. The biggest ones were Autopsy and Incantation. This certainly is not Morbid Angel worship, one of the best-sellers during death metal's heyday due to their commerciality. No, rotten, cryptic death metal was never really big. It has been and will continue to be a niche and most people detracting from the style haven't heard Vulgar Necrolatry or Wrath From the Unknown, or even the early Grave demos... "revival" implies it was ever really this big, sweeping movement... it wasn't. FLDM was. Then black metal and melodeath.

Anyway, New Jersey's Funebrarum were just a few years too late to be a 90's gem from their region of the country like Goreaphobia had been, but they're also too old to be considered a "revival" of this style considering plenty of now classic OSDM albums came out not 5 years before Funebrarum's demo that would become their debut album was released, like "Here In After" for crying out loud. Death metal, real rotten, cryptic, esoteric, vulgar death fucking metal had just been pushed underground, but Funebrarum carried the torch proudly into the new millennium on 2001's Beneath The Columns Of Abandoned Gods.

Okay, the music. This is as good as it gets. Fucking rotten, repulsive, putrid, fetid, disgusting, wretched, and other similar words from the thesaurus. End of review. Buy it now.

Oh that's right, you just turned 17 and you think Tomb Mold probably does it better. Hah, you're cute. This makes "Planetary Clairvoyance" sound commercial by comparison. Where to begin with this half-hour of repugnant flesh-eating bacteria rapidly reproducing in your bowels put to tape. The closest comparison is Grave's "Tremendous Pain" 7" meets Abhorrence's self-titled 7". Need I really say more to get you to order this on Discogs? Both those releases are also as good as it gets, whatever it may be. At any rate, the music here isn't really as much like the nihilistic, soul-crushing Incantation as everyone makes it out to be, simply due to where Funebrarum hails from. There's similarities, yeah, (both sublime death metal) but if anything this is more similar to like Dirges of Elysium which hadn't come out yet when Beneath The Columns... was released. Really though, this is very Scandinavian inspired DM in every sense and it's an influence on modern masters like Krypts, Hyperdontia, Cerebral Rot, Mortiferum, Corpsessed, what have you.

Now the songs, goddamn I can't even pick a favorite because everything on every track is so well executed. Putrid fucking riffs and suffocating, gnarly guttural vocals. DEATH growls. A visceral and unnerving rhythm section. The right blend of doom in the sense of Autopsy and even grind in the sense of Abhorrence, Funebre, and Purtenance's demos. 'Tombs of Sleeping Darkness' is catchy in a minimal sense, riffing hard when it needs to but never being overbearing, so as to let the atmosphere get the job done. 'Miasma of Pestilence' is the album's centerpiece and it's like this too, only with more of a buildup to it, being the longest track on the album.

Another thing, 'Adoration of Abscessed Cadavers', shit man, this song alone blows like at least 90% of other death metal bands ever to exist out of the water. The rotten tremolo riff coupled with the growled belches is like vomiting your fucking guts out into a decomposed carcass floating in fetid sewage. The growls on this track as well as all the others are never as in your face as they are on Sleep Of Morbid Dreams (which is a different beast of a death metal banger altogether), instead just letting you enjoy how guttural and filthy they are.

All of the latter points make for excellent (generally) mid-paced death metal, which I think is harder to pull off with the right dose of heaviness than relentless blasting and tremolo riffs. Now, apparently the band didn't think too highly of the drummer on this release. Bullshit, guys, he's all aces. Yeah, he's a bit sloppy, and you should be grateful for that. It gives the music the feel of a shuffling undead corpse rising from interment.

The last two tracks, MOTHER of FUCK, that's how you end a rancid death metal banger of an album. Each subsequent track here is like descending deeper into an obscure, subterranean, labyrinthine crypt, but 'Dormant Hallucination/Depths of Misery' nails that dynamic the best. Dormant gets pretty doomy after a death/grind segment and then 'Misery' is just straight up melancholy with killer lead guitar work at the end and everything.

You need to get this album. It brought me so much joy upon first hearing it in all its wretched repulsion. It may only be 30 minutes long, but that's part of the charm, too. It leaves you hungry for more (so go listen to Abhorrence and Grave afterwards). It also feels more like 15-20 minutes just because of how engaging the music is, and it catapults Funebrarum up to the elite of modern-ish death metal, with Beneath The Columns Of Abandoned Gods deserving to be a standard piece of death metal listening. Thing is, though, I think this is kind of inaccessible for many people, at least for them to get into to the same degree I did. At the end of the day however, it's authentic as fuck.