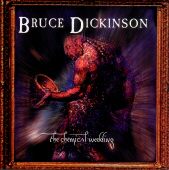 "Accident of Birth" was the album that officially marked Bruce’s solo band a significant force in the metal 90’s (even though "Skunkworks" is my personal favorite), and took the burning torch from the disgraced Iron Maiden. Along with Adrian Smith, probably the best guitarist to ever play for Steve Harris, the former Maiden screamer proves with "Chemical Wedding" that the last album was clearly not a fluke.

Taking a strong religious theme, Bruce sings about bible stories with a sinister, contentious view that is sometimes sorrowful and ironic. Tons of variety here: traditional heavy metal songs like "King in Crimson", melodic ballads - "Gates Of Urizen", old English-type folk songs - "Jerusalem" to long, epic tracks like "Book of Thel", reminiscent in structure to old Maiden classics like "Where Eagles Dare" or "Infinite Dreams", A lot more diversity in the songs than on the last one, although they’re all very similar with the constant religious theme and that they all kick major ass.

It’s strange how the guy who’s become a metal legend and been in the biz for some 20 years is still more original and creative with the genre than some of the new bands like Iced Earth, and even some other legends that are now growing ever more stale and predictable; Judas Priest; Iron Maiden; Queensryche.... "Iron bites the dust" is actually a line from "Machine Men" and I think we all know what Bruce is asserting, hehe. Iron Maiden’s perhaps saddest album, "Virtual X" - released the same year, leaves us doubtless about that!

The famous Maiden reunion of 2000 was like a physical hit to me. It’s all about money, "Brave New World" sucks more then anything either band has produced separately. Let’s hope that Bruce and Adrian still keep their own thing going, ‘cuz it’s the best I’ve heard from the British boys in a LONG time...

Bottom Line: Proudly stands and rivals "Accident of Birth": the previous Bruce Dickinson masterpiece. I pray to all that is true and pure in metal that his streak of perfection continues, and he forgets this nonsense with Iron Maiden.