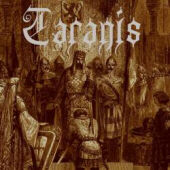 Taranis had adopted the name from the Celtic god of thunder and originated from Belgium. Perhaps now you think "Oh, Belgium, a lovely little country. Is this really a place where (black / thrash) metal grows?" But don't jump to conclusions. Their king Leopold II. (1835 - 1909) was anything else but a philanthropist. This royal murderer was responsible for the unbelievable atrocities in Congo during the colonial times. Nobody knows the exact number of victims; a journalist of the United States estimates that ten million were slaughtered. Yes, Belgium is really a lovely country.

Taranis did not have the same lethal power than Belgium's soldiers in Congo, but the band released a solid debut. Its mostly straight compositions are based on pretty conventional schemes while combining heavy metal elements and a certain amount of thrash with a hoarse voice that delivers black metal elements. The album starts very well. Galloping guitars are the driving force behind the fast opener. But generally speaking, the album does not only rely on speed. There are also mid-paced or even slow-moving pieces. The slightly morbid "Blessed in Fire" is one of these slowly creeping reptiles that rely on a simple yet catchy chorus. Moreover, the number profits from its heavy leads.

Yet it goes without saying that I also appreciate the more spontaneous, faster tracks such as "Teutonic Invasion". (It's always better to sing about other peoples' invasions, although some uncultivated cannibals in Africa do not share this point of view.) This coherent and martial song underlines the skills of Taranis to forge relatively melodic songs with a concise chorus.

Unfortunately, the further compositions of the adequately produced full-length do not reach the same quality level. Slowly but steadily, the band runs out of puff. The song formula remains the same, but the melodies are less compelling, the choruses do not strike as excellent as before and the raw, yet comparatively monotonous voice also does not deliver any surprising elements. There is no need for hard criticism, everything sounds pretty decent. I just miss a higher degree of dedication and determination. "Night in Carpathia", for instance, starts with a very interesting line, but a little bit more power would have been helpful.

Forgive me for having chosen the cynical introduction. I really like the fantastic cities of Belgium, for example Bruges, very much. Furthermore, it is a pity that Taranis called it a day after two full-lengths, because they actually were talented musicians and songwriters with a remarkable potential. Guess I will visit them under the motto "Teutonic Invasion Part II" in order to motivate them for a comeback. I assure you that this mission would be less brutal than the trip of the Belgian troops to Congo.