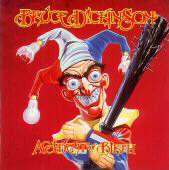 Bruce Dickinson, obviously intent on metal world domination, just relentlessly keeps pumping out these excellent albums, each one a blow to the ever-sinking reputation of his former Iron Maiden. And on this album he has clearly reached perfection and the climax of his solo project achievement. Without question, Bruce has beaten Steve Harris in the 90’s.

A heavy metal masterpiece, "Accident..." has it all, the heaviness, the beats, the beauty and most importantly; originality. From the rough and hard-edged guitars of "Freak", to the grief and emotion of "Man of Sorrows", to the lively, catchy choruses of "The Magician" or "Ghost of Cain". This is a journey through the world of heavy metal perfection. This man will go down in metal history.

The production is clear and nothing is drowned out. Though it’s no surprise that Bruce’s vocals ended up a bit too loud. The songs were mainly penned by the singer himself and Roy Z, the producer and studio guy, who took up the task as a second guitarist here alongside the legendary former Maiden guitarist Adrian Smith. Smith brings a fair bit of his own influence into songs like "Welcome to the Pit" which are very reminiscent to his Psycho Motel solo project, which, might I add, really really kicks ass!! Let’s face it, all former/current Maiden members are musical prodigies with an astounding amount of talent. You can’t go wrong with these Brits!

The song structures here are interesting and never boring, like they tend to be with other older artists. We get a solo right after the first chorus, not the second, and only two verses, not three which would make a song start to get repetitive. The holes are filled in with leads and impressive riffing. If there are any meager low points they’d be the somewhat lifeless and morose solos and, now may all the true Bruce fans have mercy on me, but his voice gets annoying at times. True, true...

Bottom Line: If you’re an old Maiden fan and who is bummed that the entire metal world seems to have gone to the extreme realms of death and black that you dare not tread, this is your salvation!!!