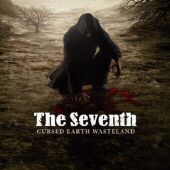 Melodic Death Metal is becoming massively huge in the global scope and it has been causing itself some growing pains. There are so many bands, that it is getting harder to find the best out of a sea of ‘the rest’ these days. Belgium has put a band out there to be heads above the crows in this genre. This outfit is simply called The Seventh.

The Seventh is a straight forward Death Metal band, delivering some massively harsh music and yet having this strong need for melody as well. With competing vocals between a barbaric growling and a raspier one that accent one another, it adds a vicious layer to the heavy and brutal guitars that seem to flay you limb from limb.

Songs like the wickedly nasty title track 'Cursed Earth Wasteland' and the even more foreboding and completely vicious of 'Born In Winter' shows a band that is large and brutal - yet the over production of the whole project makes the heaviness seem too constrained and never releases its full and vicious potential. It seems almost as if your racing a souped up Mustang with a broken down Lada. Try as you might to push that Russian car to go faster, the power is just not there.

This could have been a album to be worthy of keeping, but the way it is that is not true. It is sad when over production kills a record. I don’t know if they are still together... but if they are, I hope they strip the whole recording down to the barest of necessities. If they do, they will reach the upper levels in the whole Death Metal scene.