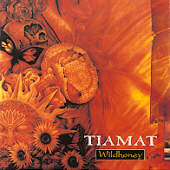 One thing is for sure, Wildhoney is an album for open-minded freaks. Now you probably think: okay, Felix is walking over the earth for almost 50 years (horrible, I can tell you), he has seen a lot of places, various cultures and thousands of different individuals. This dude must be the prototype of a broadly interested music lover.

No way! I like metal and nothing else and therefore I tend to despise the album of a band that had previously proven its musicianship and compositional talent. Of course, Wildhoney does not lack musicality. I even go one step further and admit that this portion of bittersweet honey offers two good tracks. The relaxed, slightly oriental "Whatever that Hurts" is roughly comparable with "Dead Boys' Choir" from The Astral Sleep and the pretty rocking "The Ar" with its characteristic celestial background choirs can rely on good melodies and coherent song patterns, even though the latter is a little bit repetitive. These well shaped numbers are framed by the decent intro and a waste of time called "25th Floor" which sounds like a psychedelic experience in a steelwork. Believe me, there is no need to take the lift in order to reach this strange floor. Anyway, this piece has an important function, because it separates the good songs from the mediocre or even terrible numbers. So, let's put the spotlight on the remaining pieces.

I admit that I do not understand the importance of romantic, dreamful and mysterious tracks such as "Gaia" or "Visionaire". On a positive note, Tiamat avoid schmaltz and kitsch. Yes, this kind of tunes where the emotional guitars "do the speaking" can still be worse. But these oh so intellectual, pseudo-reflective and wannabe-mystical tracks lack energy, enthusiasm and (metal) spirit. However, the worst is yet to come.

The longer the album lasts, the more painful it gets. Edlund asks "Do You Dream of Me?" and the answer is "yes, and it was a cruel nightmare". The song material moves increasingly further away from the sound that was dominating on Clouds. Not to mention The Astral Sleep with hammers such as "Sumerian Cry (Part III)". Fragile keyboard sounds paint over-dimensioned landscapes, the guitars don't want to hurt anyone and Edlund is singing like a candidate for a vacancy in the local Protestant church choir. Thank God that he uses a darker, comparatively raw approach in the first two regular tracks.

Perhaps the closer wants to celebrate spirituality, but it clocks in at eight minutes and delivers nothing but great emptiness, if we leave the female vocals out of consideration. Of course, a feminine input is mandatory for such an album. Moreover, I strongly recommend adding another female contribution while listening to this difficult album. Make love to a beautiful girl with magical powers who gives you unique kisses and further erotic highlights, that's the best way to bear the lame rubbish of the second half of this product. I speak from experience - this is my preferred kind of spirituality. Maybe it is also an option to take drugs, but I am not familiar with these substances. Either way, Tiamat always were prone to a certain degree of melancholy, but here they have gone too far. Apart from the good Sorychta production and a pretty promising beginning, this album is a total disappointment, at least for narrow-minded people like me. Did I already tell you that I have never been outside Europe so far?