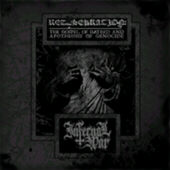 "Spill the dirty blood of Jesus"? Of course, this was exactly what I wanted to do today. Infernal War have funny ideas and they play a radical, enthusiastic and absolutely uncompromising form of black metal. The mix of brutal high-speed drumming, screaming guitars - solos from a sick brain not excluded - and restless shouting leads to a drastic attack against all that is holy, and it even boggles the mind of non-holy people like me. This is definitely no record for sensitive minds and the question must be allowed whether it makes sense to present nothing else but permanent machine gun fire. For sure, diversity can kill the power of an album, but usually an iota of diversity does not do much harm. Nevertheless, the guys from Poland have better things to do than to think about different approaches. They celebrate their fury in the slaughterhouse and love to butcher everyone in view.

It's a little bit confusing that the album does not spread the typical black metal vibrations. Instead, it has a certain punk touch. Instead of performing the totalitarian approach that dominates the ferocious side of the darkest sub-genre in general, Infernal War rather wallow in anarchic feelings. They destroy everything that could be described as music and from time to time they appear to me like spiritual brothers of Napalm Death. Believe me, it is not that easy to listen to the material from the beginning to the end, albeit no song suffers from obvious deficiencies. But the sheer brutality is somewhat tiring. The ultimate bombardment delivers an interesting facet, but only this facet and nothing else. Monotony on a high level, so to say - and don't ask me for highlights, because I cannot give you an answer. It's just an amazing bloodlust over 37 minutes.

The noisy production supports the mega-aggressive songs. I don't say that the mix suffers from imbalance, but it has a slightly annoying element. Whenever the formation decides to give full speed ahead (in one word: always), pure terror kills any kind of emotion and even the harshest way of proceeding should leave space for a minimum of feelings, right? We are still speaking about music and not about a mechanical mass production or something like that. Okay, the beginning of "Death's Evangelist" presents an unexpected leniency, but the band readjusts its arrangement immediately and everything goes right down into hell again. It is certainly an art in itself to fall victim to your own stubbornness without any cushioning. In addition, each and every song works and sets free an overdose of energy, radiation and devastation. Nevertheless, I wish the riffs would have more room to reveal their full potential. Be that as it may, if you want to listen to really f**king extreme metal, the technically competent Redesekration... should be your first choice.