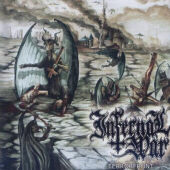 I have been a fan of this album for a long time, and surprisingly I never wrote a review of it. I hadn't blasted this for a good two years or so, so I thought I'd give it another listen. I was just in the mood for some hyper fast, angry, vengeful black metal. And that is exactly what Infernal War are.

Think of Marduk on steroids and Angelcorpse on speed. Now bash them together. That's pretty much what this album is, and it's fucking amazing. This should have been the follow up to Angelcorpse's "The Inexorable" all those years ago. Seriously, the song writing here is second to none. The riffs cut, butcher and grind, the drums sound like a goddamn tank rolling around in your head, the bass rumbles the ground, and the vocals are harsh, angry and just perfect for the sound on this album.

The drums though, holy crap. I've been listening to metal forever, something like 27 years now, and I am not easily impressed. But this... this is just mind boggling. It's rare to hear an album where the drummer is so focused and powerful that you can actually feel it kicking you in the chest. The drum performance here is out of this world. It's incredibly angry, incredibly precise, and incredibly fast. The sound and mix are also downright perfect, and the effect that they have overall cannot be denied. It's just so powerful, the way they drive the songs forward.

And that's one of the great things about this release, the songs. They are written and arranged well. So well in fact, that most of the material here is absolutely memorable - you keep thinking of certain riffs, such as the crushing display of power in "Dead Heads Empire" and the brilliant intro to "Be A Slave or Be A Lord" - it's fantastically written.

The album also boasts some pretty good guitar solos - something you don't see much of in this genre. Instead of your usual whammy bar gibberish, there are actually some well thought out solos on here, which is quite unexpected, but very much appreciated.

I don't know if the guys fluked it on this album as their other releases aren't nearly as good or as focused as this. But this is a downright masterpiece in my opinion. Every once in a while, an album comes along and just absolutely decimates its competition. This is one of those albums, it really needs to be heard to be believed.

Goddamn. This is still as fucking sick as when I first heard it nearly 10 years ago. It's chaotic, it's powerful, and it's very, very displeased. Don't miss this.