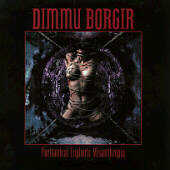 Dimmu Borgir; is it okay to call them tragic persons who did not realize the day they begun to suffocate in their own bombast? I am undecided. Puritanical Euphoric Misanthropia - to say it in advance, no tinge of misanthropic music can be found here - shows a band on its way which has already passed the point of no return. The album is filled to the brim with pompous lines, bombastic sound effects and gigantic constructions. No doubt, the music borders on turgidity from time to time and if you want to describe a few lines with the hardly flattering word "schmaltz" - well, please feel free to do so. Nevertheless, I beg to differ. Puritanical... is an ambitious, sometimes over-ambitious work with many good ideas which reflect the intention of the musicians to offer their fans the best possible record. This approach is laudable.

The spectrum goes from almost industrial shredding (the mechanized 'Puritania') to film music (the heroic 'Perfection or Vanity'), but the main component is naturally black metal. (This is the predetermined breaking point for some wise guys to scream: Dimmu's pop music shit is no black metal at all!) Everybody knows that the keyboards are an integral element of the Norwegian's music and therefore it does not make sense to wait for ice cold leads or orgies of brutality. Nevertheless, Dimmu Borgir do not flirt with the mainstream and many pieces convince with heaviness, power and depth. 'Kings of the Carnival Creation', to pick out the longest track, offers both blast beats and spooky harmonies. Its configuration ensures a lively number, flattening guitars alternate with howling keyboards and I wish I could write such a piece of music, although the kitschy vocals at 4:32 minutes are too much of a good thing. However, the song conveys a more or less malignant vibration and this is always a solid indication for good black metal. Of course, I admit that this is a rather easily digestible form of black metal, nevertheless, it is a legitimate approach within the bounds of this genre.

Of course, the production lends the songs a clear appearance. A very clear appearance and you are right, I have thought about to call the mix sterile. But the more I was listening to this work, the more I got used to its sound and after all, I see no reason to blame the band or their label for this production. The extravagance of some compositions has found its technical equivalent. It doesn't matter whether we like it or not, but the sound fits the music. Its mix of dreamful and harsh, orchestral and metallic, melodic and aggressive sections is probably not spontaneous, but well executed. One cannot blame the dudes for having created predictable songs, because their toolbox is very big and nobody knows in advance which tool they will choose next. Just have a close look at the vocals. They deliver the whole range: malicious nagging, demonic speeches, melodic laments, clean vocals and more. This is no album for those who still think that metal should be the simple music of the working class, but to be honest, I have never shared this kind of thinking. Instead, I like to dive into the eerie atmosphere of 'Hybrid Stigmata - The Apostasy'. In combination with the double bass driven sections and the slowly growing intensity, this piece reveals the core competency of Dimmu Borgir at the beginning of the new millennium. They connected melodies with aggression in order to tell horror stories - and they did a good job.

Well I think having lived with this album for 17 years now, it's time to give it a review.

I remember when this first came out, I wasn't really a fan of black metal at all. I was more into death and thrash, and to a large extent, still am. Black metal is something I will listen to once in a while, but honestly, not that often. And when I do I go for Marduk, Infernal War, etc. But when this album first came out, I listened to it obsessively for well over a year. And I think the main reason for that obsessive listening is because of Nicholas Barker.

I'm a guitar player but I've always been fascinated by incredible drummers, as a top-notch drummer can really make or break an album. While the song writing on this album is good, not great or anything - it would be much plainer without Nick's incredible drum work.

This era of Dimmu also has as to what I think is the best line up they've ever had. Nick Barker on drums? Check. Vortex on bass and vocals? Check. Mustis on keyboards? Check. At this time, they were simply not to be fucked with.

Yes, it's over polished and over produced, but who cares. It sounds good. The guitars can be heard loud and clear, the bass is there, the vocals are mixed just perfectly, and while the drums are quite up in front - well, they damn better should be. You don't get a drummer of this caliber only to turn him down in the mix. Nicholas Barker dominates here. He decimates worlds. The drum work is probably the best of his career, it's absolutely top notch. Just listen to the incredible speed and fluidity he has during "Blessings Upon the Throne of Tyranny" - it sounds like a fucking cyclone has erupted in your speakers. It sounds like a whirlwind of kicks, snare and cymbals. And it's not just fast, sloppy drumming, either. It's fast, razor sharp and precise. It really is a thing of beauty.

The song writing is pretty solid throughout, with the orchestration parts being highlights, surprisingly. Usually on these types of symphonic albums, they are poorly done, but here Mustis has clearly put a lot of thought into his arrangement and his work, and it clearly shows. It adds a level of depth to the album which I think is often over looked. The guitar riffs are good, sometimes even extraordinary. There are some fillers on this album (I'm looking at you "Puritania") but for the most part, it's all barrels loaded, no bullshit metal. "Absolute Sole Right" is a prime example of this.

I'm not going to get into the lyrics or the vocals because there's no need really. If you're familiar with Dimmu, you're familiar with Shagrath and his vocals, and here they sound just fine. However, what really stands out in the vocal department are the clean vocals delivered by Vortex, which are just spectacular.

The album ends with "Perfection or Vanity", which I think is a perfect closer for such an album. My limited-edition CD has a cover of "Burn in Hell" by Twister Sister but I could take it or leave it honestly. Was never a fan of that band, and never will be.

I know that I gave this album a 9 out of 10, which is a bit high. Let’s just say that it holds a sweet spot of nostalgia for me. But besides that, it really is a good album, one of Dimmu's best. After this, I always thought they went a bit downhill, focusing more on their image than their songs, a problem shared by Behemoth. But this is, from pretty much start to finish, a stellar album.

Based on polls and all kinds of forums, the most anticipated release of this year is finally here. Was it worth the wait? Imagine lying on the beach next to a gorgeous woman when suddenly gates of hell open, everlasting darkness, total chaos! In front of you, fallen angels rape and murder your hottie and you take the biggest pleasure of your life in a worm bath of her blood. That’s how good "Puritanical Euphoric Misanthropia" is.

With the additions of the Nick Baker (Cradle Of Filth) behind the skins and a new guitarist, Galder (Old Mans Child), this Norwegian combo created an album that will set future standards for the black metal genre. I know this is a very bold statement, but for once PLEASE forget about all that commercialism, sell out shit-talk and let the music speak for itself.

I guarantee you there is a lot to hear. What Nick is doing behind the drums is unbelievable. The flawless execution of his signature double bass and unholy fast beats can make your body shake in the sickest flailing convulsions. Complimented by former Borknagar front man, now full-time bassist and backing vocalist Simen Hestnaes, the rhythm section sounds like a wall of slaughter knifes cutting the air with the precision of a Swiss clock using 220V battery.

Vocals on tracks like "Absolute Sole Right or "Hybrid Stigmata" range from Shagrath's abrasive behemoth screams to Simen’s outstanding Nordic melodic lines which are one of many excellent additions on this epic. Another element worth mentioning is the work of violins. Combined with Mustis' atmospheric synthesizer work, they create a sacrilegiously dark background that compliments the brutal guitar riffing and gives overall feeling of listening to symphonic overtures.

"Puritanical Euphoric Misanthropia" is more monumental, more melodic and more dynamic than any traditionally played black metal. Saying that they exceeded my boldest expectation would be an understatement. They blew my fucking head off.

Bottom Line: This is music with a capital M and U and S and I and C. Simply put, you can’t NOT have this in your collection.