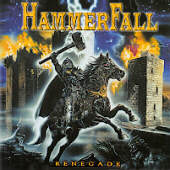 Hammerfall’s new record the "Renegade" was produced in the USA with sound master Michael Wagner. Hmm… spending probably twice as much money than for their two previous releases combined I was expecting something really special. Did I get what I wanted? Let’s see…

First track and we have first surprise. They start with a mid-tempo "Templars of Steel". Where are those speed metal songs that kicked our asses from the start on their previous albums? Actually, this is good. Very powerful, typical heavy metal.

The next tune "Keep the Flame Burning" is just good old Hammerfall; an up-tempo heavy metal banger that reminds me of the highlights from their debut release.

Then… no I’m not going to describe all the tracks. I can only tell you that there is a lot of music here. For the exceptions to the typical fast speed-power songs, we have the classic metal ballad "Always Will Be" (which of course talks about a broken heart and love) and to make it more interesting they even threw an instrumental "Raise the Hammer" into the whole mix.

For any Hammerfall and power metal fan this is a very good album. In my personal opinion, it’s slightly disappointing because, with all that budget, they could have recorded something more than just another ‘true metal’ album. This genre also needs some advancements and brave musical experiments.

Bottom Line: Not the best material they could come up with, but still in the championship league of the traditional metalworkers.