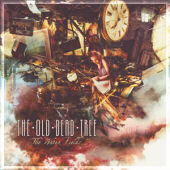 Type: Full-Length
Release Date: 2007
Label: Season Of Mist
Genre: Doom, Gothic
1 Start The Fire
2 Don't Wake Me Up (Those Who Never Wear White)
3 Dive
4 What's Done Is Done
5 The Water Fields
6 Is Your Soul For Sale?
7 A Distant Light Was Shining
8 Regarding Kate
9 Rise To The Occasion
10 Hey
11 This Is Now Farewell

I was given this album as a gift from a friend that moved away a few weeks back... more like this someone simply dumped this CD on to me. With in two songs, I knew why that the album had been dumped on to me. This was truly one to have overlooked in the long run of things.

Mixing a weird array of styles from Paradise Lost styled doom, a whole lotta Goth, then loading it down with overshadowing EMO trappings. ODT ends up sputtering, limping forwards and then collapses to die a horrible death. You can hear the overpowering chaos that each song has, which simply ends up takes away from the fact that this band from France can probably play... and play well. ( I noted that they have 3 other releases out there... never heard them though)

This album is more than a tiresome listen, it actually made me hate the band. They need to retool their sound so their hidden talent can finally shine through, rather than get lost in all of the disorganized quagmire the whole album seemed to have been filled with.

I am so glad I was given this album, I would hang myself I had plopped down the money for it! Nobody should... ever!