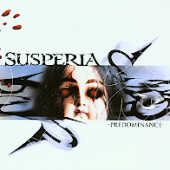 ::   ::
Type: Full-Length
Release Date: 2001
Label: Nuclear Blast
Genre: Black, Gothic, Melodic, Thrash
1 I Am Pain
2 Vainglory
3 Illusions Of Evil
4 Specimen
5 Journey Into Black
6 Of Hate We Breed
7 Objects Of Desire
8 The Hellchild
9 Blood On My Hands
10 The Coming Of A Darker Time

What type of music would you expect from the guys that played in Dimmu Borgir, Old Man’s Child and Satyricon? Stupid question, isn’t it? Well, not really cause if you thought the answer is black metal, then I have a surprise for you. OK, maybe there are a few black metal moments but whole CD is more death-trash metal than anything you’ve heard from the members’ previous bands.

I have to admit, there is something about this release that I can’t stop listening to it. At first I thought they caught me by surprise because it’s not black metal, but than after few days I realized it wasn’t pure death metal either. Because this state of confusion doesn’t happen to me very often, I can assure you there is something special about "Predominance". Maybe this CD has a soul….

To fully describe the guitar work by Cyrus (live guitarist for Satyricon, Old Man’s Child) and Elvorn (Vidder), I would have to write a thesis not a short review. Basically, they created amazing death riffs that somehow still hold you in a black circle. Some of them are even going back to 80’s thrash but without an outdated sound. To confuse you even more, Athera’s vocals range from deep as hell growls to even a’la King Diamond screams. As always crystal clear production from Abyss studio makes the rhythm section so clean, that combined with those killer riffs, it makes you feel the pounding deep down inside your guts.

I know that these guys are not new kids on the block (Did I write this? Shit, how could my fingers come up with a phrase like that?!?), but I still have to treat this as a debut. So, let me give a small piece of advice: if Athera could stick to growls and drop all clean vocals, "Predominance" would be even better and it might become one of the best CDs of this year.

Bottom Line: Hey, either I drink too much and my mind is in a constant state of confusion or this album is that good. Either way you can’t go wrong, you have to have this CD. I’m already impatiently waiting for their next one.