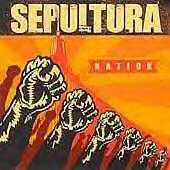 Nation is a concept album about politics, war, and basic human rights. With this release Sepultura are daring you to try and label them, and even making an attempt at this may be enough to make your head spin. The band seem even more open to outside influences on this release with classical, reggae, and hardcore making appearances on Nation.

On this record Derrick Green's vocals are more strong than ever. On songs like Vox Populi and the stand-out Who Must Die?, he broadens his range and really shows what he is made out of. There are several mid to slow paced songs on this record. Songs like Border Wars and Sepulnation sound like toned down Chaos A.D. tunes, but still prove to showcase that Sepultura charm. One stand-out on this release is the underrated tune Tribe To A Nation which has an interesting reggaecore vibe best done by heavy rock legends Dub War. Two hails to the band's past come out in the songs Revolt and Human Cause, but these songs are too short and sound like they could have easily been done by at least ten hardcore bands already.

The album is concluded by a slow-paced piece titled Water and the classical influenced instrumental Valtio. The latter song is a very unique and enjoyable track, yet I cannot really say the same for the track mentioned before it. The only song on this album I could have really done without is the sluggish track The Ways of Faith, which almost makes want to fall asleep. Not to end this review on a negative note, this album does has several jewels in its second half. The previously mentioned Who Must Die?, Tribe To A Nation, and the kick ass tunes Reject and Saga breed hope into this New Sepultura sound.

Bottom Line: As with Against it may take a couple listens to really get into this release and also like Against it takes a while to finally get into your skin, but once it does; it feels good.