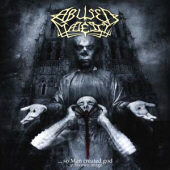 Disc One: "so Man created god in his own image..."

Artful Blackened Metal right from the start, Abused Majesty bring a war from the very first note. Multi-hooked Blackened Death Metal is the course for this disc, but naysayers do not be swayed by stereotypes - this is no more-evil-than-thou gothic droll. The conflict embodied in the dark violent riffage, abundant ear candy, and nonstop battery is well crafted, full force, and creates, beyond all; an atmosphere of attack and beauty that is rarely matched in the underground. Abused Majesty has brought forth a wonderful bastard child in this digipak, with all of their experience shining through with strong foundations and spiralling towers of glistening black.

The orchestrations are quite fluid and full, then blunt and coarse when called for. There is an undeniable art to writing music like this, and these guys have it flowing in their veins in abundance. Were it to stop there, one would be satisfied, though read through the lyrics and find concepts and metaphors truly thoughtful. When one mentions gods, dark ones, and satanism, juvenile is usually the trademarked tongue, though here is present a very strong revelling in the darkness with a refreshing penchant for detail. Take from it what you will, but listen to the razor slit larynx spewing here, crystalline dedication, and just try and question the sincerity.

The drums are massive and tight, a barrage of artillery, firing on all pistons, energy sucking hell. Not only can this guy hang with the most articulate of blasts, but he feels even the slower hooks. Very clean and accurate, not too much, not too little, violent and always blunt force. The bass cements, and even carries many segments here breaking traditional black rules of mixing. Keys abound on this album are beautiful, majestic, and at times just downright eery. Though keys were done by session members, I do feel the need to heed the inherent neccessity they are on this album. The atmosphere is doubled, thick and mirky, tone and firm, even when samples are applied there never seems to be a moment when you think the band has lost their path. Even on the more experimental 'Omnivorous Sonatina', where the keys carry the song from start to finish; without the combined knowledge and mastery of the musicians involved - this might have broken the album, instead it holds as a mild momentary relaxing breath before the album's concluding tracks again firing on all guns ablaze.

This album of dark and pristine Black Metal strikes a note of hope for me. Where it seems most Black Metal has devolved into something less than once promised, here is where black monoliths still stand firm and hold high. If I were to seek out comparitive killing fields of earlier generations - I would choose that of older Satyricon, Old Man's Child, and even the early anger of Samael and early Emperor. That being said, this CD stands on it's own as one to raise the bar for any of the myriad of Black Metal bands fighting their kvlt battles out in the underground. This production is very high quality, again this band have outdone themselves. You can hear all the fury and hellfire on this disc in wonderful unorthodox manner.

Though not sure what to think of a retrospective disc being coupled with such a brilliant album, my curiosity was definitely picqued. The disc begins with the 2006 demo "Crusade Of Immortality", then fast tracks back to the 2001 demo "Gods Are With Us", then to the 1999 demo "Thee I Worship". The 2006 demo is a very good segue from the immensity of the previous album, showing the promise delivered by said album. A little more of a gothic edge, but nevertheless, just as violent and furious. It's hard to gauge this demo on anything besides the demo production - which isn't bad at all. There is a Satyricon cover present too plus one track not present on the album, both of which fit perfectly.
So on to the 2001 demo, which begins with an even more gothic hint, maybe feeling a little like oldschool Dimmu Borgir, but very quickly a notion destroyed. Rawer, and perhaps even more unhinged melodically - moving faster and grittier. The demo production here less refined, with some vocal experimentation reminiscent of old Dodheimsgard trollisms.
At last to the even rawer 1999 demo, which expectantly is even less production wise than the previous two. Though this demo doesnt stand up to the production of the previous two, again this is not bad quality.

This retrospective collection is actually a bonus for fans and newcomers alike, as it is nice to see a bands progression, and there early foundations. it's nice to know that this band has never settled and always moved forward. I can say without a doubt that they have stuck to their path at least from what's on this disc to present. Every black blistering ounce of hate packed into this demo collection is worth every second enduring. Even those amusing laughs swirling around the earliest material.

Upon recieving this digipak, I noted the extremely artistic and professional packaging. The art and layout are very beautiful and well contrasted. Now couple that with the booklets included, full colour, including a scrapbook of pictures in the retrospective that makes any metalhead proud of their own youthful experiences within the scene, and a very good space using concept that doesn't hurt the eyes. It should be also mentioned that the graphic artist for this release has also done work for the likes of Paradise Lost, and Rotting Christ, but I truly think they outdid themselves here. I dont want to forget to mention the label, I am not familiar with Witching Hour, or Mystic Productions, but would like to congratulate them and thank them for granting the band's wishes with this release. This packaging is a testament of why CD's should be bought and not ripped, and I am ultimately impressed with the professionalism and ethic behind it.