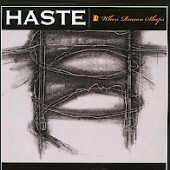 I’d have to say that the prospect of two primary vocalists for a metal band always sounds great, and this certainly piqued my interest enough to check out this disk. After a good listen however, I realized that I spent more time trying to classify Haste than giving it a really close listen to list the pros and cons.

Strangely enough, Century Media has billed Haste as "hard rock"… or, more accurately, they have stated that Haste have "raised the bar that hard rock albums must face in 2001." Well, considering that this music is more along the lines of semi-melodic death metal forged with low-density distortion, giving it a much more raw punk/hardcore sound, I suppose you could say the statement is true if can possibly even consider Haste as part of the hard rock scale.

Once I decided that Haste most definitely is a much more obnoxious beast than a "hard rock" labeling would allow, I gave it another listen. Compared to most death metal, the drums were seriously toned down, more along the lines of punk bands like Shiner or Quicksand. The guitar also had that same kind of raw punkish feel, but it was a strangely depressing sound. While I will gladly applaud Haste for their somewhat radical approach to metal vocals, exhibiting the raucous and maniacal raw style of Fred Durst on Limp Bizkit’s debut Three Dollar Bill Y’all, I have to say it got really boring and monotonous. Haste must’ve figured that might be a problem, so they threw in an occasional clean melody. Unfortunately, their cure for monotony flops quicker than Sylvester Stallone film festivals.

I have to say that there wasn’t a single piece of this album that grabbed me. I think that Haste has a decent concept going, but the vision for making something great out of it seems to be lacking.

Bottom Line: If repeatedly running head on into a wall while some animated jackals slap together a death/punk/hardcore/I-wish-I-had-a-melody sandwich, by all means grab this disc. For my own ears, I need a little more skill and a little less monotony.