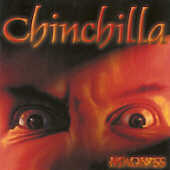 Unfortunately, I have very little to say about this disc. While I was listening to it, my wife’s exact words were, "You don’t like me anymore, do you? Why are you doing this to me?". Yes, smart-asses, she was making the comment in reference to the music.

While the album started out with some decent guitar riffing that sounded like a less-polished Whitesnake, by the fourth track, it was all starting to sound the same. Alright, that was the positive part.

Whitesnake was never a propagator of fine lyrical art, but sure as hell stymie Chinchilla with a seemingly deft command of poetry. What I’m trying to say in so many words is… Chinchilla’s lyrics mind-numbingly stupid. They’re worse than the ones I came up with when I was 13 years old (one of them had the line "and if you make me cut my hair… so there!"). In fact, they’re so moronic it’s freaking painful as hell! By the time I reached the "required" ballad track (titled Broken Heart, all hail the masters of originality!), I felt so sorry for this band and my own ears that I just turned it off.

Bottom Line: This is the most ghastly album I’ve reviewed to date. It might peak the interest of some 12-14 year old boys that are starting to kick rebel-mode into high-gear, but all in all, I could make better music by pinching monkey nipples.