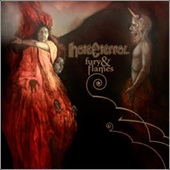 I must not be a typical fan of this band, because Fury & Flames seems to be unanimously considered Hate Eternal's shittiest album. The reasons for this are because this has too much noise, mindless riffing and blasting, and the production is too cacophonous for death metal, which are...apparently reasons people don't listen to Hate Eternal? It never really made sense to me, especially because throughout my attempts to really "get" what this band is all about over the years, Fury & Flames is the only bunch of songs that keeps calling me back.

This band’s "all-star team" is generally assumed to be the King Of All Kings lineup of Rutan, Jared Anderson and Derek Roddy. Roddy in particular is the "classic" drummer of Hate Eternal, which I've never been able to wrap my head around as Jade Simonetto blows Mr. One Take out of the water. Roddy only played on two of their seven albums (and I, Monarch isn't even that good), and his style actively seems to make the band worse. I love fast, complex drummers, but Roddy's style is somehow monotonous enough to not feel technical yet overstimulating in a way that goes against the groove. I've just never thought he fit the vibe much, though many seem to consider his rhythmic style essential. Even Tim Yeung delivers one of the better performances in his career of blasturbation on their solid but unextraordinary debut, and I usually can't stand him, so it's not a product of the band dragging down their skinsman.

Simonetto, on the other hand, is an absolute beast. On Fury & Flames, his speed feels like it's almost too much for him to handle, but he pulls it together by adding cymbal accents and careful snare placements to ground it. The drums are at the forefront of the album, so you can examine his work with microscopic precision - everything's right where it needs to be, and any bit of slop in the mix just creates a slight sense of chaos. It’s as if the songs could rip open a hole in the universe if they lean a bit too far one way.

The production, frequently lambasted on Fury & Flames for being too drum-heavy and cacophonous, is gripping and maintains that “wow” factor throughout with the swirling, dense guitars, kick and snare all fighting for room in the mix, a proper mess to accompany the borderline incoherence that should define Hate Eternal. The point of this band, to me, was always to sound like hell fucking incarnate in death metal form, and this is the album where they dialed in and got laser focused on ripping your face off after a few albums of trying to cram in ill-fitting atonal technicality and odd transitions. The riffs on Fury & Flames show hints of more straightforward groove and tend to stick to themes rather than suddenly changing it up 2 or 3 times, and there’s even hints of something that could be called a lead melody. Perhaps fans at the time saw this as a step back into something more comfortable and masking the simplicity with a big, cavernous sound, but to me it sounds like a band that always had obvious talent finally finding the ideal way to channel their abilities after years of never playing to their strengths.

Normally an “everything in your face, all the time” album such as Fury & Flames would wear thin after a couple of tracks once you get used to the fury, because there’s no dynamics. This is where the band’s aforementioned technical skill comes into play - instead of trying to make every single song accomplish everything it possibly could, they let things develop more slowly and use their chops to create distinct and varied guitar parts from song to song, giving each track either a standout part or great and thorough consistency. Not only does time bring more clarity to the production values, but its noisy cacophony also means you still get a bit of a giddy feeling when a song like 'Hell Envenom' kicks in with the blasts and it feels like a rollercoaster that’s starting to float off the tracks. The ubiquitous Alex Webster gives a more rounded guitar presence to the trademark sound, the drums are actually off the charts, and at the end of the day I have no qualms saying this is Hate Eternal’s best album. Were people just mad they signed to Metal Blade and dropped Derek Roddy or something?

Three years after “I, Monarch”, Hate Eternal are back to remind all faithful followers who is the “King Of All Kings” and crush all others who are not worthy. “Fury and Flames” is the fourth studio album of Hate Eternal, and shows us that they are not the ones “Conquering The Throne” anymore.

So, the story keeps on repeating – this album, just as the previous ones, has been recorded with yet a different line-up. After Jared Anderson passed away, our mainman Erik Rutan had to come up with new blood for the writing and recording process. To take care of the bass lines, Erik asked Cannibal Corpse’s Alex Webster, and after listening to the album a few times, I must say that Mr. Webster did more that he was asked to. In Erik’s own words (which pretty much say it all) “Alex created bass lines that were more like compositions rather than bass lines.” Amazing musicianship that enhances the whole experience, taking it not one but a few notches higher.

Tim Yeung and Derek Roddy set Hate Eternal’s previous drumming speed and ferocity to a very high level, so Jade Simonetto had to step into really big shoes. But, believe me, that guy must have some enormous feet, ‘cause his performance is simply jaw-dropping. Not only is he fast, accurate and consistent, but also adds the very needed groove, making Hate Eternal’s condensed hyper blast a little fresher and adding much needed space.

We also have a new addition on the second guitar. Shaune Kelley grew up together with Erik, and both of them recorded their first album in their band, Ripping Corpse. The chemistry between those two guitar players is undeniable, and to be honest with you, I cannot wait to see the band live. Having added a second guitar will definitely enhance their concert presence and make sound juicier and fuller.

I am hoping that the current line-up will be consistent enough to record at least few more albums, because “Fury and Flames” is the best album I’ve heard in a long while. I know that most of the music was composed by Erik Rutan, but without his collaborators, the final effect would be much different. “Fury and Flames” hits hard from the very beginning and keeps plowing all the way through. Intense to a point of almost physical pain, crushing any hope that humanity may have left, proving that Hate Eternal is the very definition of extreme metal.