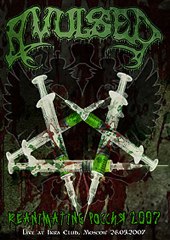 Avulsed is one the few death metal bands out there that do not sound as the majority of the copycat outfits that are infesting the scene and which only contribution is to block the music in an endless circle of stereotypes. Not the case of Avulsed that emerges from Spain’s perverted underground to kill all posers and establish a new world order of true death metal for true fans.

After releasing outstanding and successful studio albums like Stabwound Orgasm, Yearning for the Grotesque, and Gore Splattered Suicide, you said, “Wow! This is a good band, but do these guys sound as good on stage as they do on studio records?” Well, the answer is quite simple. YES! Hell yeah, they sound fucking superb and not just that, their energy is also awesome and that’s why this live DVD deserves to be reviewed. Avulsed is well known for its energetic and melodic guitars riffs, brutal blast beat drumming and unique guttural vocals sponsored by David Rotten and that’s what you’re going to get in this live performance. Ok, let’s start with the basic information. This is Avulsed's first official DVD and it was recorded in Russia on May 26, 2007. Now, let me tell you that really few death metal bands have the energy that Avulsed has when playing on stage.

The concert starts with an incredible instrumental track from the Stabwound Orgasm record called “Amidst the Macabre”. This is an outstanding track because it has a catchy Arabic feeling in the guitars. Then your head gets pulverized by the best song that this band has written so far, “Stabwound Orgasm” - brutal, rhythmic and fast. You can recognize some old Cannibal Corpse influences in this track. During the first three songs we can witness how the Russian crowd gets hooked with the band’s energy and as the gig goes on they go crazier and more enthusiastic (this is what makes this DVD interesting). However, this contagious energy wouldn’t be possible without the charisma of the band’s front man, Dave Rotten, who plays an important role in the band’s concept and live performance. Dave Rotten is a living death metal dinosaur that has been singing for Avulsed since the very beginning and has also participated in different death metal projects in Spain (Christ Denied, Putrevore, Golgotha, and Sad Eyes). In this particular gig he goes crazy with the Russian crowd (he even stage dives in the track “Powdered Flesh”) and that’s actually awesome for the fans! The connection that the band creates with the audience is amazing and that’s what makes this DVD a mandatory purchase for Avulsed true fans.

In summary, this DVD contains 19 live tracks that will leave you begging for mercy from beginning to end, including cover songs from legendary bands like Exodus and Motörhead. You will also find the most outstanding songs that this band has vomited over 20 years of its career. Prepare to be crushed by songs such as “Carnivoracity”, “Stabwound Orgasm”, “Powdered Flesh” “River Runs Red”, “Devoured of the Dead”, “Infernal Hemorrhoids” and “Exorcismo Vaginal” (Vaginal Exorcism).

Ok, this DVD deserves a 100% because the band’s as well as the audience's brutal energy is constant throughout the whole concert. There’s a great variety of brutal songs (that basically summarize the band’s career) and the amount of death metal is just enough to reanimate the Russian frozen audiences.

There’s no more to say about this brutal concert, so just go ahead and buy it. The music as well as the atmosphere that you will feel is just brutally insane.