Dead To This World 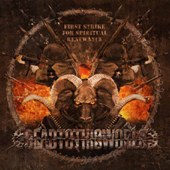 Type: Full-Length
Release Date: 2007
Label: Dark Essence Records
Genre: Black, Thrash
1 I, The Facilitator
2 Night Of The Necromancer
3 Shadows Of The Cross
4 Goatpower
5 1942
6 Into The Light (Baphomet Rising)
7 Unholy Inquisition
8 To Free Death Upon Them
9 Hammer Of The Gods
MetalBite on YouTube

Out of the mists that hang on the shores of Norway, Iscariah... the once heart and soul of such bands as Necrophagia and Immortal... has brought forth onto our puny planet his soul blackened solo project... one that he is loudly proclaiming his right to ascend to the black metal throne. Dead To This World, unleashes some of the most sadistically brutal, yet inspiring Black/Thrash Metal that has ever come off of the fjord strewn shores of Norway in a very long time.

DTTW’s album’s dark and bone jarring power catches you quickly with its heavy, unabashed maelstrom sound and keeps you in it’s hold with uncompromising fury. DTTW delivers one atomic sized, demonic fuelled hammer onto an utterly unsuspecting metal scene, announcing Iscariah’s rise to the skulled throne of the BM scene. I loved this man’s many other projects over the years, but this album is the true results of his brilliance and his darl lurking visions through music and lyrics alike.

Even though this is only a two person band (Iscariah’s partner in darkness is Kvitrafn: ex-Gorgoroth drummer... The man also has enlisted the talents of Stud Bronson (ex-Funeral guitarist) along with some song writing help from Jason Healey (Atomizer) to craft and form the hellfire explosion that he had dubbed Dead To This World.

By the second listen to the CD, I was a disciple completely awash with the surging power that every note seemed to come out, wafting out of the darkness that hangs over the river Styx as you go to meet the Unholy One.... By the third play... Hell, you get the idea here. Go out and see for yourself.

Humm... anybody starting to smell brimstone?