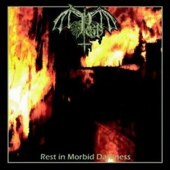 Type: Full-Length
Release Date: January 21st, 2008
Label: Season Of Mist
Genre: Black
1 Possessed By The Beast
2 Nights In The Cursed Chapel
3 Blessed By Hellfire
4 Rest In Morbid Darkness
5 Bestial Crucifixion
6 Vomit Up The Blood Of Jesus
7 Shadows Of The Dead
8 Final Strike Of Doom
9 The Lust For Cruelty
MetalBite on YouTube

Pest from Sweden deserve my eternal respect, because their blacker than black monument Lifit es dauðafærð was, is and will forever be unique. Nonetheless, we have to keep in mind another release as well, their lukewarm last album. The here presented work from 2008 does not reach the brilliance of the 20-minutes-piece and honestly spoken, nobody did expect this. But - and here comes good news - it also has nothing in common with this mainstream-metal influenced wannabe black metal that The Crowning Horror delivered in abundance.

The ruffians dish up compositions which sound harsh, black, insane, spontaneous and sometimes pretty bulky. In combination with the somewhat muddy production, the songs create an almost chaotic impression. The delicately titled track on position 6(66), to give but one example, starts with a pretty generic riff. It already hits the mark, but Pest intensify the aura of the song very quickly by generating dense and untamable sections. The song almost overturns. Miraculously, nobody gets injured - if we do not count some poor Christians who were in the wrong place at the wrong time. Well, let them count their blessings, we have to go on.

The duo, that much is certain, does not lack nastiness or strength. Its songs have this rabid essence that separates true black metal from calculated music which wants to be - but never will be - part of the black movement, due to whatever reason. Pest's authenticity becomes blatantly obvious and sometimes they have this anarchic and simultaneously archaic touch that a trio in its infancy, Venom was its name, once brought to life. But Pest do not sound amateurish, their bestiality is based on solid technical and compositional skills. Okay, I agree that it remains discussable whether it was necessary to pen another epic number. The closer clocks in at 14,5 minutes. It draws its power from a loud / soft dynamic, and it does not fall by the wayside. Nevertheless, a more compact format would have been helpful, because this track is not able to generate the unfathomable depth of its big brother. But the project to write a worthy successor of "Lifit es dauðafærð" was doomed to failure right from the beginning.

Over-ambitions aside, the less opulent songs score without exception and are almost immune against melodies. "Nights in the Cursed Chapel" offers short melodic parts at the end and yes, there are more pieces that hold trace elements of harmonies. However, the normal case is that Pest manage a hellish storm. Take the title track or "Blessed by Hellfire", these songs show how it sounds when Nifelheim and Aura Noir unite. Pest combine the best of both worlds and they benefit from the fact that these worlds already lie in close proximity to each other. So many exciting sequences show up that it is almost impossible to stay on top of things. But isn't it better to be part of this whirlwind instead of having just the observer status? All non-epic tracks, and this is an almost magical detail, have a very primitive appearance, but they are definitely not overly simply constructed. However, their pure rawness is impressive, and it goes without saying that the roughshod voice emphasizes the coarseness of the material. So, there can be no doubt that the album is able to deliver the soundtrack for your next home slaughtering. Just buy some poor animal or kidnap a fan of ... please insert the band you hate most... and let the celebration begin.