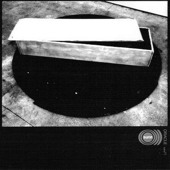 "When therefore I had made ready the chamber, so that all was dark, save for the Lamp upon the altar, I began as recorded above, to inflame myself in praying, calling upon my Lord... And I was wrapped in the black brilliance of my Lord, that interpenetrated me in every part, fusing its light with my darkness, and leaving there no darkness, but pure light."

Black to the blind and unable to move I am in some cold, wide open space (a chamber?) and from afar some strong reverb, deep growing in volume rumble is slowly approaching me. Is it Celtic Frost old tune 'Danse Macabre?' No! At some even further distance I begin to hear incantation-like mumblings of some mad priest[?]. Have I finally reached my own inferno? What have I got myself into? The sound becomes more and more... and more physical. I can feel now the vibration on my whole body. Where am I?

After a while familiar faces become recognizable. Attila Csihar is rising from what seems to be a coffin. Among other robed figures O'Malley and Anderson add themselves to proceeding ritual. Slightly bended, holding their guitars they stand almost still; facing wall of amplifiers they 'measure' the sound's enormous pressure.

Heavy fog subsides, whiteness is now blinding me. Every visible piece of equipment is in [sic!] cast resin and salt, with only lacquered stage platforms and sound panels being black. I feel frozen. All there is around me seems to be slowed down, lifeless and absent from any hope. With the feeling of loss and a phantom of what once was I'm left to unknown.

The roar is immense yet so tempting that I decide to mentally dissolve myself with it all and forever.

Stephen O'Malley in one of interviews said they create "transcending super-archaic amplifier music," music which is "pretty alien and celestial." I agree. My awareness of sun-centered universe is now strongly intermingled with that of Sunn 0))) and not only because of helio)))sophist.

Part of this album sonic material was originally composed for a life performance collaboration with the New York sculptor Banks Violette at the Museum Paley Gallery in London, June the 6th. It marks a new beginning for Sunn 0))) spectacular carrier drawing some parallel lines with the world of contemporary art.