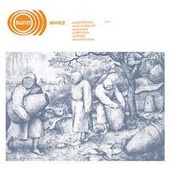 I'll be honest. I went into this album expecting pretty much nothing. If Sunn O)))'s mind-numbingly boring ØØ Void and Flight of the Behemoth (and even the lackluster Pyroclasts, their newest full-length at the time of writing) are anything to go by, this is not a band that can consistently pull off instrumental tracks. Sure, on occasion they'll abandon their vocals and make something brilliant like 'Alice', but the majority of the time these attempts just end up seeping into one another and uninteresting monotony with no payoff is all you're left with. Looking at the track list, I was somewhat dismayed to find that I might have to wait a full 38 minutes before anything interesting happened.

The other reason my expectations were set as low as they were was the way the tracks were named. Let’s look at how the band have titled, in my opinion, one of their best works. 'Why Dost Thou Hide Thyself in Clouds?': an intriguing question, calling whatever higher power might be out there into question, a slight tone of despair, of pleading with said deity to reveal itself. It's a perfect title to encompass a deeply personal song filled to the brim with lament and woe. Now let's look at what they decided would perfectly convey the tone of White2: 'bassAliens'. Seriously? It sounds like a joke, certainly not the kind of name you'd associate with such a generally sincere band.

But as I was beckoned into Sunn's creation by the first droning notes of 'Hell-O)))-ween', I found my apprehension quickly fade. This wasn't just background music. In fact, it was barely music at all - it was a piece of sonic architecture by the drone titans themselves, and I could not help but once again fall in love with the band's way of creating such overwhelming soundscapes. By the time my dreaded 'bassAliens' rolled around I was thoroughly immersed, my mind in an almost meditative state. But what came after the bass guitar's final buzz faded I could not have been prepared for.

Here's the thing: all my complaints about the track name accounted for, I could not have come up with a better title if I tried, because it just describes the sound so perfectly. 'bassAliens' is just that: utterly alien. It sees Sunn's standard low drones combine with eerie melodies from what I can only presume is a keyboard, a pretty pattern of notes gradually becoming more twisted and dissonant as the piece goes on. The discomfort is ever so slowly dialed up, first with a looming, high tone perfectly designed to create dread, then strange noises in the background that sound mechanized yet disturbingly organic. Pretty soon you're hearing what could almost pass off as speech and breathing. It's a flawless use of the uncanny, the almost familiar, and it all comes together to create one of Sunn's best buildups (second only to the legendary 'Alice' in my opinion). The fact that Stephen O'Malley and Greg Anderson can both think up and actually handcraft these sounds stands as testament to their immense creativity, a perfection of both the duo's twisted imagination and their method of conveying their artistic vision to the listener.

The album could've ended there, and I would've been completely satisfied, but Sunn decided to stretch the boundaries of drone even further, closing with 24-minute behemoth 'Decay2 [Nihils' Maw]'. It's unearthly in a completely different way to 'bassAliens', with Sanskrit lyrics echoing the dawn of man and forming an atmosphere of the occult. It's also the beginning of what would become a long history of collaborations with Hungary's legendary vocalist Attila Csihar, and in that respect the song gives a worthy impression of what is to come in future. Not quite sung, not quite spoken but somewhere in between, Attila's vocals bring a certain dark charm with their every appearance. Higher-pitch choirs and even sinister rasps make appearances later on in the song, serving to raise the intensity and once again do wonders building the track up.

However, I do feel 'Decay2' outstays its welcome somewhat. I found myself becoming more than a little bored by the end of it, and thanks to that I'm forced to deduct a few points from what would otherwise be a pretty much perfect Sunn O))) release. But don't let that discourage you - the White albums marked a very significant shift away from the simplistic style of the first two records and into something much more dynamic and imaginative. This was the first true pinnacle of an extensive journey through some of the most wonderful and terrifying music metal has to offer - a journey that with most even if not all new installments continue to keep us guessing, awestruck, to this day.