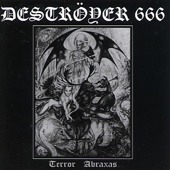 Some bands can excite me a lot, but leave me relatively cold the next moment (read: song). You guessed it, Deströyer 666 is one of them. The euphoria of the first two critics does not really set in with me in the case of Terror Abraxas, because the general phenomenon of the Australians is reflected on this EP. It is not only the bland, expressionless and somehow tired sounding cover version at the end of the CD that clouds the overall impression.

Deströyer 666 always have the best songs to offer when they sound as evil as if the Grim Reaper himself is grinding his too-long fingernails over the blackboard of first graders. But that happens too rarely here. 'A Breed Apart' certainly has a fine measure of poignancy, bloodthirstiness and cruelty. Admittedly, it already becomes clear here that the drum sound is at a loss compared to the guitars. But some nasty melodies give the opener a scratchy, nasty character. After that, however, malice has its lunch break.

Of course, it was never a one-dimensional speed kills approach that the gentlemen from down under pursued. Similar to their faded compatriots from Assaulter, Mr. Warslut and colleagues can also be real bullies without having to set all musical levers to full attack. Nevertheless, the vocals, the melodies and the aura of the tracks lack a bit of the pitch-black element for me here. The anthemic 'Trialed by Fire' does not fall under easy-listening metal, but there are certainly enough pieces in the studded-wristbands-and-leather-jackets direction that challenge the listener more. No question, the band does not commit any serious mistakes. But when it comes to intensity, meanness and hostility, the last ten percent is missing, not only in the melodramatic, seven-minutes-mark-crossing title in the centre of the song list. It may be that the band itself noticed this during the recording. That could explain the partly hefty rumbling in 'Terror'. Unfortunately, the guitar lines die in this track before they can leave an impression. In contrast, they do not miss their effect in the other (self-composed) songs. No one should say that everything is bad here, it's just that not everything is good either. As a result, Terror Abraxas presents itself as a quite nice, but by no means essential EP, which would have deserved a few percentage points more with a less dull sound.