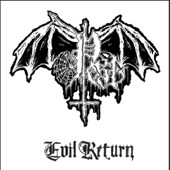 The duo Necro and Equimanthorn, better known as Pest, took a liking for bringing two exclusive studio songs to the people via vinyl in 2006. Good news, the result can still be heard today. Rest assured that the relatively raw, mangy and with a mean undertone produced songs are in no way inferior to those on the regular studio albums. The title track, released on the B side ("Side Metal"), has a few schizophrenic-morbid guitar tones, but mostly the gas pedal is pressed. Moreover, the melodies, as far as one can speak of them, have a bulky note and even the short, quiet introduction spreads a mood of discomfort. The barking, nagging and spitting of Necro doesn't exactly create a cozy mood either. 'Evil Return' (the song) breaks out into a wild tempo again and again and sometimes it almost sounds like the drums can't keep up. In the end, however, everything fits together.

'Damnation Until Death' also sees no point in restraint. Rather, it hits even harder and faster than the title track. Released on the A side ("Side Black", of course) it immediately switches into attack mode. Again, the melodies are rather hard to identify and not truly catchy, but beautifully gruesome and caustic. Through the inferno shimmers nevertheless not only towards the end of the piece the one or other guitar harmony. Here, too, the hoarse-raw vocals again set some vile accents and in this respect fit very well to the not dissonant, but nevertheless very idiosyncratic guitar lines of the duo. An affinity for the anarchic there-are-no-rules attitude of the punk movement cannot be hidden by Pest, but this does not affect their completely black core. Doubtlessly, those who are in search of a more unscrupulous version of Nifelheim will be happy with Evil Return, which is ornamented with a simple yet attractive artwork. I don’t say that the material is essential, but the ten minutes demonstrate that Pest were on a very competitive level back in 2006. Only in 2013, unfortunately, things looked quite different.