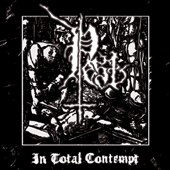 In 2004, Pest gave the global black metal scene a true godsend with a sensational EP. It was sensational in two respects. Firstly, because of its superior quality compared to the outputs of other hordes. On the other hand, it also stood out in the internal comparison. Both Desecration, the album before the EP, and In Total Contempt cannot hold a candle to this star of the plague catalogue.

Where the EP scores with dignified viciousness, In Total Contempt relies on mangy biting. Music and production are oriented as before on Desecration on the work of Darkthrone. The low fidelity gives the eight tracks a strikingly misanthropic note. The clear rejection of the usual sound patterns is known to be an invention of Fenriz and Nocturno Culto, but it also enjoys some popularity in Sweden. However, an oddball sound is not only an announcement to the scene. The renunciation of a wall of sound also poses greater challenges for the musicians. Their material has to be good enough to cope with a copiously washed-out, detail-swallowing production. Here, however, I have doubts about Pest.

The two protagonists step on the gas, they throw a good dose of villainy into the mix and they don't let anyone get in their way. 'Thrones Ablaze' is a successful introduction with its stomping and rumbling guitars and the next tracks are cut from the same cloth. They reflect a hostile attitude, not only because of the constantly throaty vocals. Moreover, they do not lack vehemence, but unfortunately there is not very much that keeps sticking in the brain. 'A Vengeance Rising' marks the first song that breaks out of the scheme. It adds some slow-moving parts with droning, almost sick sounding guitars. Yet generally speaking, the song-writing does not surprise with a massive number of different ideas. The basic compositional formula remains the same during the entire playtime of nearly 40 minutes. It’s not an insubstantial, feeble or powerless approach and single parts of the tracks are truly impressive. Nevertheless, the album leaves room for improvement in terms of cruel catchiness, diversity and excellence in riffing. Tunes like 'Slaves of Celestial Bounds' or 'Dreams of Life Seem Morbid' present sturdy, pretty raw black metal, but they cannot challenge the classics of the genre.

All in all, In Total Contempt is neither a milestone nor a fake. It lacks individuality to a certain extent, but enthusiasm is not missing. However, the Pest song you must have is not released on this album. Did I already mention that the band has a larger-than-life EP in its discography?