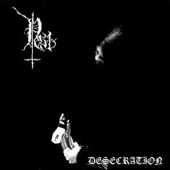 The previous review for Desecration, Pest’s full-length debut from 2003, is titled “Darkthrone worship or rip off” and another reviewer also mentioned the Norwegian duo in his headline. Of course, Pest act in close proximity to the role models who saw a blaze in the northern sky. Already the artwork follows the aesthetics that Darkthrone’s first black metal album established. The number of six tracks also indicates the spiritual connection from Pest to Fenriz and Nocturno Culto and so it comes as no surprise that there are musical similarities as well.

The material commutes between slow-, mid- and fast-paced sections, but the single songs do not like tempo shifts. They are either cold or hot, but they don’t like to change the temperature. From this follows that songs like the pretty slowly flowing 'Hours of Eternity and Death' are not overly exciting in terms of velocity and the decent yet unspectacular guitar work also does not trigger enthusiastic cheers. But honestly speaking – and I know I am pretty alone in this – I never fell in love with “Ablaze in the Northern Sky”. Its ingenious title promised much more than the music was able to keep, just my five cents. In contrast, Pest conquers the black spots of my heart with pieces like the comparatively furious 'Dark Northern Winters'. It is exactly as generic as its name, but I don’t care. I love black metal for what it is, no more, no less.

The album sounds raw. The guitars have a profound, deep tone and the guttural vocals emphasize the Nordic origin. No doubt, the lead singer must be a Scandinavian troll in rage. Anyway, he gives the album a big portion of vileness. Mission fulfilled. This is not to say that the instrumental section lacks negative vibes. In particular the belligerent 'I Am the Plague' (nice idea to put the climax on the last position of the track list) spreads life-denying coldness and whenever Necro nags the title, I have no doubt that he really is the plague. By the way, the final song closes the cycle in terms of speed, because the opener also prefers rapid rhythms. However, I don’t think that 'Ninth Nocturnal Departure' was a good selection for the opening position, because its guitar work seems to be borrowed by Darkthrone, to put it politely. Moreover, the following 'Commanding Armageddon' sounds like the little brother of 'Quintessence'. I agree that the Swedish duo has gone a step too far here.

However, if we forget the lack of originality for a moment, Desecration deserves a positive rating, because it breathes pure, solidly performed black metal. No gimmicks, no superfluous extras, just Scandinavian darkness which was inspired by artists who influenced an entire generation of black metal musicians. If this is the worst problem, then I can live with it.