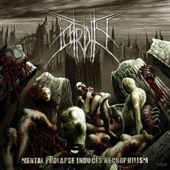 The debut album by the brutal death kings Putridity. Not really an amazing or memorable record, but it exists, and it's not horrible. This album is decent, and again; it's the band's beginner work.

I like the intro. It's horrific and scary and provides what the theme of the album is and how the music will be. The songs are filled with energy and disgust, the cover art and the music actually go great together, it's almost like it's the same thing or something, if that makes sense. Songwriting is very good of course, I like the structures and speed on everyone. But that doesn't mean this album is good overall. The main issue I have with this album is the drums. The kick drums are too loud, they sound empty and they're always there, just deep in your ears nonstop, the snare is incredibly weak and boring, the drums provide zero backbone at all. A crappy weak snare with an ear-pearcing double kick? One thing I really hate. It'll eventually get past you, but... The only backbone this album truly has is the guitars, and even those aren't great either. The guitars are the trademark Putridity low-tuned chuggy mid-paced strumming and squeals thing over and over, which I really do love. But the way this album's style is written makes it not as good as it could be. This is wasted potential. The demo was a blueprint for the debut and what it should be like, but what we actually have is a slight pullback. Questionable stuff.

Also, on this release a full band has been formed. No longer Ciccio by himself. We have BrutalDave on drums, Alessandro on bass, and again Ciccio on guitars and vocals. This album is a decent enough effort, but this is kinda disappointing for a full band's work. A self-proven demo followed by a full length that isn't as promising as the actual demo. What a kick in the water. But besides all the bad parts, that doesn't mean the album is ALL bad. The sound of everything isn't all that amusing but the songs are listenable and are enjoyable most of the time. Once you listen to this you'll definitely understand what exactly I'm trying to say here.

This may sound like a negative review, but I'm only covering the bad parts because they need to be noticed. I'm middle grounded with this album. But again, all these bad parts don’t make the entire album "bad" but there's tons of room for improvement here.

Italy’s Putridity literally means decomposing, decaying and pungent as well...and with what I have heard, it perfectly fits with the music they have. Simply put...This disk does leave a remarkably bad stench in it’s wake, and a bad taste in one’s mouth as well.

While some parts of the music seems to be interesting, the production leaves me to wonder if they had picked the right team. What ever talent that lays with these three guys, has been obliterated, trampled and then lost in the recording phase. Recording downright muddy, almost quicksand styled production leave almost no separation between the gruff vocals and any of the instruments and clogs your brain with nothingness noise. It is a complete incoherent wall of disjointed sound, that even some of the best sludge metal bands out there today would not even want.

I am a real optimist at heart, I was hoping with each song, that it might become better. It did not get any better with each passing second, and my hope did wain fast, then that part of me simply died a truly horrible death at the hands of whoever engineered this disk of pure garbage for the band.

I advise that this album must be ignored at all cost, and never see the light of day ever again. With even a decent production team and perhaps a little thought also pit in on Putridity’s part... things would be ( and sound) a hell of a lot better than what was delivered to me on this cd. I love over the top metal so much (read my Braindrill review)... This album was not what I was wanting, expecting or actually needing. After listening to it, I just want to get some Advil and put this shit out of my mind.

Skeet shooting target would be a waste for this one.