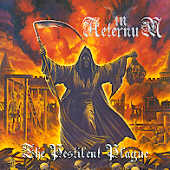 For a band that touts stupid little slogans like "Play this at maximum volume or be a wimp" or "If you don’t enjoy this record, fuck off and die" on their CD sleeve, I would expect something either as powerful or terrifying as hell.

But that’s not what you get with In Aeternum’s The Pestilent Plague. In fact, if any band is so bold to write crap like that on their CD, you can bet your ass there’ll be people like me to shred those idiotic claims. To save time, I think I’ll just bullet point what these candyass dolts deliver:

This is the most mediocre and boring death metal I’ve heard in a long time… perhaps I wouldn’t be so hard on them if they weren’t conceited enough to actually print that truckload of chicken feces on the inside cover.

Bottom Line: These guys are the equivalent of a conceited film director that’s made nothing but low budget, not scary, B horror movies.