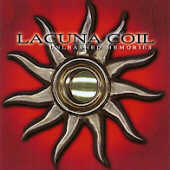 Italy’s most admired gods of emo-metal stamp the seal on their third album and confirm to anyone who had a last remaining shred of doubt the sheer talent, prestige and commitment they hold. These guys do their own thing and they do it best; Lacuna Coil have hit solid home-runs throughout their career and there is nothing but clear skies ahead for them. “Unleashed Memories” is their strongest work to date!

Stacking large emotional chords within a clear and powerful mix, Lacuna Coil’s balanced vocal-instrument harmony displays their ability to create some of the finest melodic metal in the world! Now whether it can be called metal is up to the listener, as 'Senzafine' and a few other songs’ radio-friendly mainstream style even reaches the level of pop music (reminding me strongly of 'The Corrs'), which can be a turn-off. It’s the heavier numbers, most memorably '1.19', which pick up the beat and let loose all the emotion, energy, and power the band has got to enchant you and stir up some of the most feminine emotions that no one imagined existed in a hardy metal heart. Get out your hankies, boys...

Like fellow (and mellow) artists including Katatonia and The Gathering, Lacuna Coil’s formula is based on the principle of less-is-more. The songs are simple, straightforward, and very accessible, but they’ll move you and toy with your emotions more than any kind of music in the world. The style is predominantly depressing, much like modern Katatonia, but with a stronger beat and more energy, not to mention the beautiful female vocals by Cristina Scabbia. She sings and the instruments are the background veil that constantly twists and writhes, representing the different emotions and moods in the song. Backup singer Andrea Ferro adds his own voice in every once in a while, supporting Cristina’s light voice with his deep and bassy one.

The music and vocals are blended in perfect harmony and the album is few notches short of flawlessness. While Lacuna Coil don’t quite fit into an average fan’s idea of “metal”, I strongly recommend this album to any and every one of them on the planet. This is one of the most exciting and unique bands that exist on the edge of the metal world and help to expand its boundaries to strange and beautiful places. It’s easy to fall in love with this band and I am a common victim.

Bottom Line: Hardly room for improvement in this beautiful and emotional work of art. Definitely on the lighter side of the spectrum.