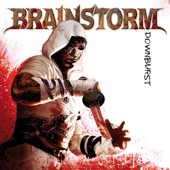 From the introductory letter-

“…Now, after 2 1/2 years of wait, BRAINSTORM have recorded their long awaited new album “Downburst” with producers Sascha Paeth and Miro, which will be released in January 2008. And BRAINSTORM is stronger than ever. “Downburst” will not only satisfy the needs of their followers, it will surprise many and even convince the non-believers! All songs show the incredible song writing talent of the band members and prove once more why this band has been up and running for over a decade now and for sure is here to stay! The songs range from fast, hard and double-kick-driven bastards to epic soundscapes to melodic metal hymns. “Downburst” is a beautiful beast, a real ball of steel but also an emotional masterpiece with no fillers... just killers!...”

Got ME interested, that’s for sure. As a matter of fact, it got me so interested, that I’ve been listening to it a little too much lately. What keeps bringing me back the most is the energy and melody. Brainstorm’s music is a mixture of Heavy and Power Metal done just right – no-one tries to outshine anybody, and no-one is trying to show off as a virtuoso. Crispy guitar work that’s very melodic and catchy, battering drums and galloping bass all mixed well into the presentation. What a treat! The occasional keyboard builds up and enhances the atmosphere in the background of some of the songs – giving them an extra boost. Excellent lyrics are delivered by vocals that are rather Rock/Hard Rock than Power/Heavy Metal, without any annoying oversinging and high-pitches. Last but not the least are the choruses – if any of you decide to give "Downburst" a chance, you can be sure that you’re gonna catch yourself shouting the words with the band. Very, very addictive.

Well, in an overly-saturated Power Metal market, Brainstorm brings an album that pulls in, hooks up and doesn’t let you go even for a breather. This is the one to bang your head to. Numerous times.