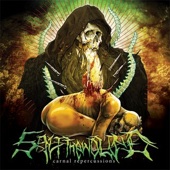 ::   ::
Type:
Release Date: 2008
Label: Rotten Records
Genre: Death, Melodic, Metalcore
1 The Beginning
2 Better Than This
3 The Conformist
4 We'll Sleep Until Sunset
5 Gloves
6 Gannon
7 A Slight Burning Sensation
8 Peas And Carrots
9 I Swear The Visine Is For My Allergies
10 The Rape And Pillage Of Spisville
11 Carnal Repercussions
12 The End

Among all of the sub-genres of metal, most of them I like or admire. With that said, there are a few genres that I either don’t like or don’t understand. Metalcore is such a type, that on the surface is chaotically heavy... a sonic tidal wave with metallic overtones.

Hailing from one of my favorite US cities, Salt The Wound explodes from Cleveland to strike its own chord with the masses. Playing what I describe as Metalcore with some Scremo-metal influences tacked on haphazardly, they come at you with true as shit fury...unfortunatly it is with little else. Musically repetitive with no diversion in any way, the band tries to be like a tenth rate Black Dahlia Murder that seem to have no idea how to write a simple song. The addition of un-needed pig squeals, sort of like if the singer was being goosed with a cattle prod, just adds to the hopelessness of this band.

All the songs seem to be almost identical, almost being like as if the album was all one song, with same parts that are only named differently. There is not much in the way of musical variety going on here, seemingly as if one track had been caught in a horribly cued up and never ending loop. I looked for anything close to something good to say about Salt The Wound, or to report on anything at all - sadly, I found nothing.

Salt The Wound seem to be rather popular and rising fast... guess I am not a fan of Metalcore, needing musical substance over style. I would like to see this band, who seem to possess some talent that is hidden deeply away, get into a more melodic style, and perhaps get rid of the Pig-boy screamer and get themselves a real vocalist. For me, this was a waste of my time and effort, but something in it dose give me a small shard of hope.