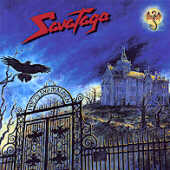 Type:
Release Date: 2001
Label: Nuclear Blast
Genre:
1 Stay With Me A While
2 There In The Silence
3 Commisar
4 I Seek Power
5 Drive
6 Morphine Child
7 The Rumor
8 Man In The Mirror
9 Surrender
10 Awaken
11 Back To A Reason
12 Shotgun Innocence

Metal veterans Savatage are back with yet another thematic album addition to their powerful twenty year history. Savatage have always been story-tellers, and they were perhaps the very first to bring in the epic and operatic feel to metal albums. I’m prefacing the review with this because when it comes to the concept work of Savatage, you really need to take the whole package into consideration.

With the likes of Hall of the Mountain King and Wake of Magellan behind their belts, Savatage certainly needed something with a slightly different edge to it. That isn’t to say that the music has changed, though. The story behind Poets & Madmen is perhaps the most disturbing and interesting of all to date. It follows three guys with nothing better to do, who break into an abandoned asylum to discover a disturbing story of a Pulitzer prize winning photographer gone mad and have a bit of a surreal experience.

The problem that I find with the story telling of Savatage, particularly on Poets & Madmen, is that you can’t figure out what the story is by reading the lyrics; they’re just way too cryptic and ambiguous to effectively weave a story together. Of course, I had a pre-release promo CD to review without the official sleeve that might include the story, but I had to go to Savatage.com to read the short story that the album was based on. After doing this, listening to the album suddenly became a much more interesting experience.

So to take the music aside from the story and judge it separately I think is somewhat unfair to the work of art that Savatage are delivering. However, I still feel the loss of Criss Oliva in the guitar work. Somehow it just seems a little bland compared to the intensity and flair that he’d added to the albums before his unfortunate departure from this earth.

That aside, this album still has a lot of interesting and entertaining listening to offer. Savatage’s ever present trademark sound like metalized classical music is almost brainfood on tracks like Morphine Child and Surrender.

Bottom Line: Fun story telling from the concept metal vets, but still lacking much of the excitement and edginess that the late Criss Oliva brought to the band on albums like Mountain King and Gutter Ballet.